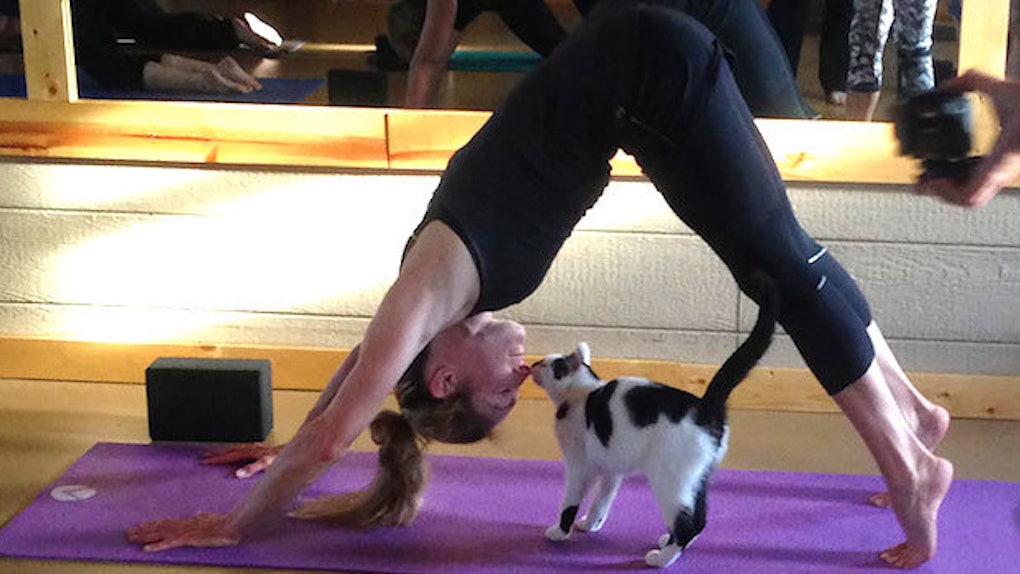 We've all heard of yoga moves named after man's best friend, like the downward-facing dog.

But apparently, canines aren't the only furry critters that are all about the mind and body experience.

The no-kill shelter Homeward Bound, recently gave its cats a chance to show off their purrfect poses alongside a bunch of human yogis at a Decatur, Illinois studio.

Jeanette Skaluba, a social media volunteer at the shelter, was the genius who came up with this clever idea for an adorable stretching session.

After a video of a cat sitting on Skaluba's shoulder gained a lot of attention on the Internet, Skaluba concluded "cats rule the Internet" and figured a yoga event with the felines would encourage people to adopt these zen kitties.

Well, it turns out, Skaluba was right.

The event was a big hit and raised about $500 for the Homeward Bound shelter.

But the best part is one of the shelter cats left the yoga class with a new yogi mom and a loving new home.

The no-kill shelter Homeward Bound recently teamed up with Yoga at Connie's...

...To give six of its shelter cats the opportunity to mingle with yoga students on the mats.

Throughout the session, the cats got in on the stretching action with their new friends...

...And took breaks in between for belly rubs, of course.

According to Jeanette Skaluba, this yoga class "gives these cats exposure and shows their personality. [She thinks] people can envision these pets in their home easier because they're outside the shelter."

The event was a huge success for both the humans and the cats alike, so Homeward Bound plans on having more of these fun, feline yoga classes in the future.

This isn't your typical yoga class.

Take a look at the video below to see this cute kitty yoga class.