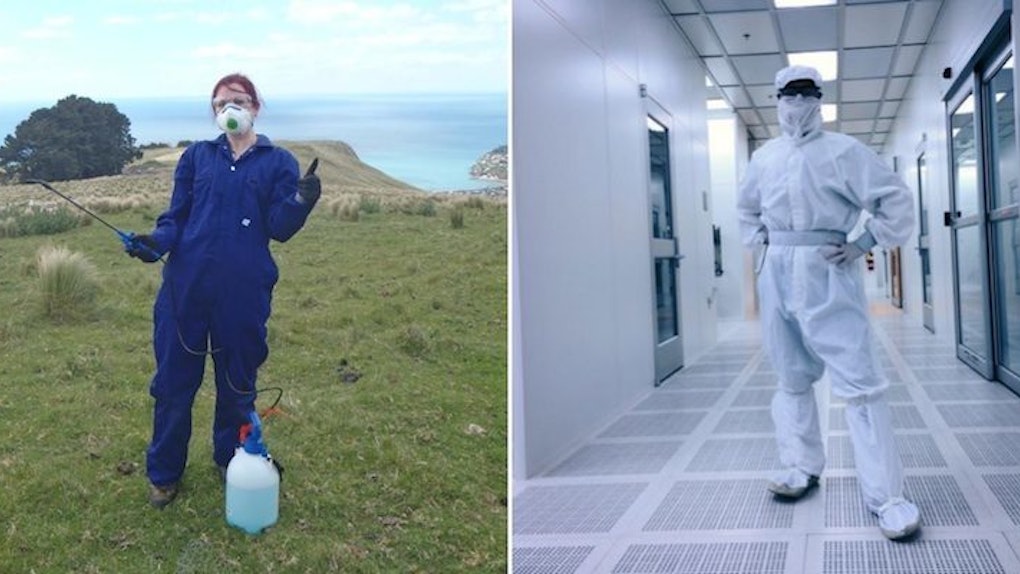 For a Nobel Prize-winning scientist, Sir Tim Hunt is kind of an idiot when it comes to the ladies.

The researcher recently found himself in (very) hot water after claiming women are distracting in the laboratory.

Obviously, his remarks did not go down well, especially among his female peers.

So, clever and badass female scientists are doing something about it with the wonderfully sarcastic #DistractinglySexy hashtag.

First used by feminist publication Vagenda magazine, the concept is simple and totally effective: Participating women post selfies of themselves in the laboratory or the field using #DistractinglySexy, often, while they're doing decidedly unsexy work.

One woman, for example, hilariously chose to post a photo where she's shoulder-deep in a cow's assh*le.

Many pair the images with gleefully sarcastic captions to mock Sir Hunt and show just how ludicrous they believe his misogynistic comments were.

Honestly, it's the best thing to happen to social media since Kim Kardashian broke the Internet.

The hilarious hashtag first emerged on Twitter two days ago.

A search on the social media site will uncover hundreds of gloriously sarcastic posts from badass women.

Female scientists of all ages and backgrounds joined the movement.

Nothing like a sample tube full of cheetah poop to make you #distractinglysexy pic.twitter.com/tdBTLRos4p — Sarah Durant (@SarahMDurant) June 11, 2015

And it has become so big, Sir Tim Hunt even caught wind of it.

Yes I know I am #distractinglysexy in my Level A PPE. The suit totally flatters my curves. pic.twitter.com/LUb5nXx9yO — Geeky Girl Engineer (@gkygirlengineer) June 11, 2015

Regardless, the (accurately) self-described “chauvinist pig” refuses to take back all of what he said.

The 72-year-old insisted while he “did mean” the remarks, he's “really sorry” for the uproar he's caused.

He said, “[It was] a very stupid thing to [say] in the presence of all those journalists."

In an apology, Sir Hunt announced, “I'm really sorry I caused any offense… I just meant to be honest, actually.”

How do my male colleagues publish anything when I show up dressed so revealing? #distractinglysexy pic.twitter.com/D3GYQQciyc — Van Q. Truong (@vanqtruong) June 12, 2015

Unfortunately, that apology wasn't enough for his employers.

He was booted from his position as honorary professor at University College London.

Hopefully, he'll keep his anti-women beliefs to himself in the future.

Still #distractinglysexy at 60! I like working in contaminated marshes, because the salty water disguises my tears! pic.twitter.com/4EnjH9tSZC — Jennifer Pournelle (@jpournelle) June 12, 2015

But, only if he can keep his thoughts straight with all of these distractions.

Citations: Female Scientists React to Sexism With Pictures Showing How DistractinglySexy They Can Be (Daily Mail)