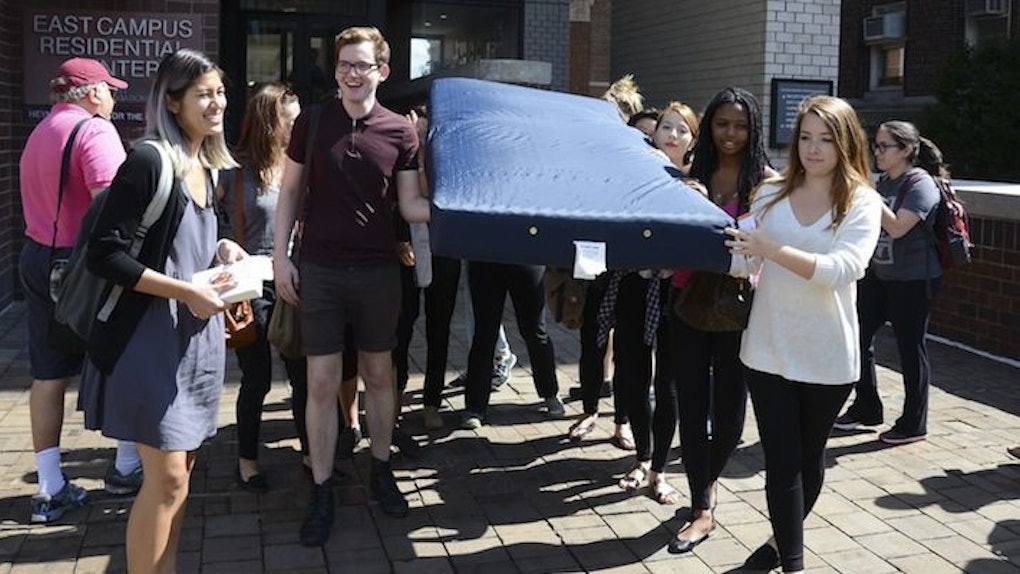 Is Teaching Women Self-Defense Really The Only Way To Prevent Rape?

The general attitude of Millennial women toward life in general can perhaps be summed up in the four little words that formed my now-adult cousin's childhood refrain:

I do it myself!

We're independent. We're empowered. We know what we want, and we go for it.

And yet... I grew up in a city where I knew not to go downtown after dark. When I went to college in another city, I knew not to walk home alone.

If for some reason I had to walk home alone, I did so quickly, furtively, no headphones in and keys shoved between my knuckles.

Because, you know, rape.

I was one of the lucky ones. I have not been the victim of this violent and often psychologically debilitating crime, either in college or elsewhere.

It breaks my heart to know that hundreds of thousands of women a year are not so fortunate.

When it comes to rape prevention, any news of a successful new method is good news, news worth celebrating. And just this week, researchers announced that through a new program, they had been able to cut down the risk of rape by about 50 percent at three Canadian college campuses.

That's a big number! We like big numbers when it comes to cutting down sexual assault. Even though 50 percent isn't 100 percent, if one of two women who might have been raped aren't, that's a program worth following up on.

There's just one problem. A little tiny fly in the ointment. Just one little thing that might give us pause.

The program consisted of a series of sessions meant to educate first-year students on how to prevent sexual assault. A year after this intervention, they collected the data by surveying the students who had gone through it.

Now, wondering who exactly went through the program is a valid question. Was it the incoming male students, the ones who are almost always the perpetrators of sexual violence on college campuses? Was it older male students? Frat bros? Guys who said they consumed alcohol?

No, of course not. It wasn't any of those groups of people. In fact, the program didn't target the potential perpetrators at all.

Instead, it targeted the potential victims.

The program assigned 451 first-year female students to go through a series of classes designed to train them on risk assessment, self-defense and defining their own sexual boundaries.

Another 442 women got what we'd probably consider the more normal approach -- some brochures and an information session they probably texted through.

At the end, researchers found that of the women who had been through the in-depth educational program, only 5 percent had become the victims of rape, compared with about 10 percent of the other group. If we're just talking about attempted rape, the stats were 3.4 percent vs. 9.3 percent, which is pretty impressive.

Of course, the jump from one in 10 women being rape victims to one in 20 is a big one and certainly worthwhile. If this kind of program is the best we've got right now, why not spread it to all college campuses? Like, yesterday?

The problem, of course, is that it by putting the onus on the victims to prevent their own rapes, we're ignoring the underlying problem of sexual violence in society. We're taking a good look at the elephant in the room and then choosing to tip-toe around him instead of kicking him the f*ck out.

The grand majority of programs designed to prevent rape -- a full 92 percent, in fact -- are targeted toward women, not men.

There has so far been very little research on the effectiveness of these programs, but what small studies have been completed do reveal positive results.

On the other hand, teaching women to cover their drinks, kick their assailants in the groins and run away really, really fast is an easier path that has proven to be somewhat productive, although it leaves much to be desired.

Sexual assault, as we know, often happens between established partners or within families, and these strategies really fail to address that at all.

Programs designed to address that risk, which involve teaching women to recognize the behaviors in their partners that might eventually lead to sexual violence, have showed some signs of success. But here, even more infuriatingly, it's doing nothing about the fact that all too frequently, these men feel the senses of sexual entitlement, hostility, power and control that would lead them to commit rape.

Those characteristics, of course, are the major problem that needs addressing. The thing is that it's a big problem, and it's been around pretty much since the beginning of time, which gives us enough of an excuse to shy away from it and instead, teach victims how to avoid it.

Rape isn't just going to go away, though. I'm fully in support of spreading programs like those centered on self-defense, keeping those five in 100 women from being raped, but the fact is they're still Band-Aids on bullet holes. When are we going to get into fixing those bullet holes?

I now live in a city with an extraordinarily low rate of violent crime, with amply lit streets and plenty of people wandering around after dark. It's just out of habit that I still refrain from listening to music and know exactly where to find my keys in my bag.

Will that ever change? In this world, it's unlikely.