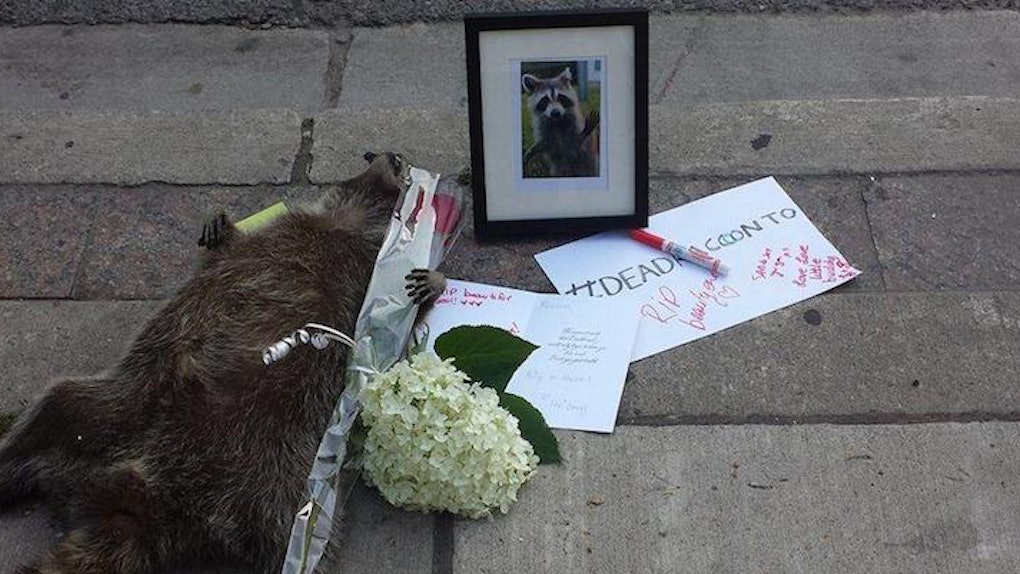 A dead raccoon united the city of Toronto.

A bunch of playful Canadians spent Thursday erecting a touching memorial to a raccoon that passed away on the streets of Toronto.

It all started when Toronto resident Jason Wagar decided to alert the city to the Canadian roadkill.

Someone decided leaving the animal on the street wasn't a dignified way to let the raccoon leave this world, so a note was written and placed beside the body.

More Torontonians flocked to the makeshift animal wake to pay their respects, and thus, #DeadRaccoonTO was started.

While some residents were angry with the city for not clearing up the memorial...

…City of Toronto Councillor Norm Kelly had a pretty fun time with the situation.

Residents are being asked to keep their green bins open tonight in honour of #DeadRaccoonTO. — Norm Kelly (@norm) July 10, 2015

Even memes paying tribute to the raccoon (named Conrad) started to make their way across the Web.

A donation box was even set up next to the raccoon to pay for a proper burial.

Someone has added a donation box beside the dead raccoon. #DeadRaccoonTO pic.twitter.com/fXHzcf9LJu — Kris Pangilinan (@KrisReports) July 10, 2015

Eventually, the city realized, although it enjoyed the social media push #DeadRaccoonTO was giving it, having a rotting corpse on the street probably wasn't a good long-term idea.

So, someone stepped in and removed the memorial.

And Norm Kelly went back to the Web to have a sit-down talk with his followers.

The raccoon was laid to rest later that night.

Citations: People in Toronto Have Created a Memorial to a Dead Raccoon Left on the Street (Time)