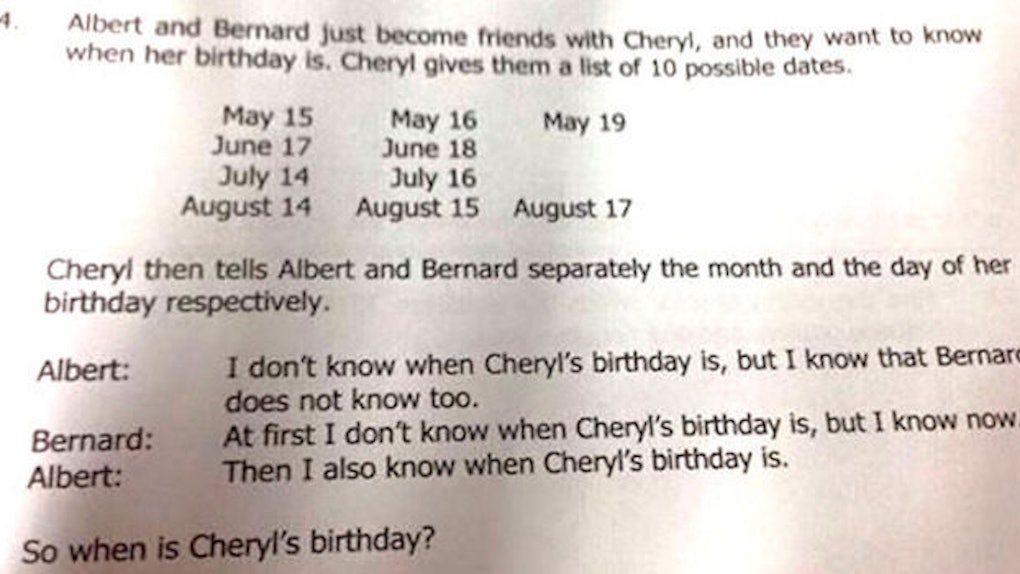 This Math Problem For 14-Year-Olds Is Confusing Adults Everywhere

This may be the hardest math problem ever created.

The crazy-difficult word problem was written for the Singapore and Asean Schools Math Olympiads, a competition reserved for highly intelligent 14-year-olds.

The question — intended to be used in the test — somehow leaked and was brought to the attention of a TV presenter in Singapore, who later reported on it.

Singapore's Study Room breaks it down:

First we need to figure out if Albert knows the month or the day. If he knows the day, then there is no chance that Bernard knows the birthday, so it must be that Albert knows the month. From the first statement, we know that Albert is sure that Bernard doesn't know the birthday, so May and June should be ruled out (the day 19 only appears in May and the day 18 only appears in June). In other words, if Albert had May or June, then he cannot be sure that Bernard doesn't know, since Bernard could have had 18 or 19. Following that statement, Bernard knows that May and June are ruled out. Then, Bernard is able to know which month it is. So it must be either July 16, August 15 and August 17 (not 14th as then he can't know). Since Albert subsequently can also be sure of the date, he must know it's July. If it's August, he can't be sure as there is August 15 and 17. So the answer is July 16.

If you managed to figure it out, congratulations: You're a genius.

The rest of us can take comfort in knowing that the problem has gone viral because of its sheer difficulty.

Whoever dreamt this one up is truly evil.

Citations: A math problem for 14 year olds is stumping the world (Mashable)