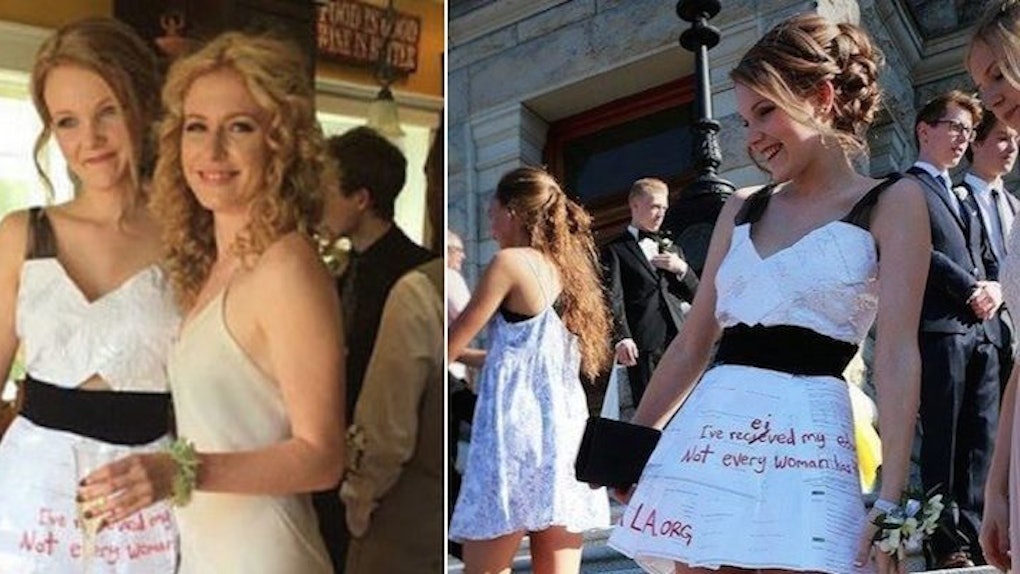 There was probably one girl in your high school who spent a ridiculous amount of money on her prom or graduation dress, thinking it was the most important thing in the world.

Erinne Paisley is not that girl.

The inspiring 18-year-old decided to forgo a traditional graduation dress and donate what she would have spent to The Malala Fund in honor of her personal hero, Malala Yousafzai. And instead of buying a new dress, she made her own.

She made the frock out of recycled math homework assignments to highlight the importance of education and debunk the sexist myth women aren't good at math.

On the dress, Paisley wrote,

I've received my education. Not every woman has that right. Malala.org.

The teen, who recently graduated from Reynolds Secondary School in Victoria, British Columbia, is no stranger to standing up for her beliefs.

During her freshman year, she shaved her head in honor of Cops for Cancer, and she regularly makes YouTube videos about feminism and bullying.

She also cofounded an activist group at her high school called Action Now, which focuses on women's rights and gender equality.

When asked about the dress by Canada's CBC News, Paisley explained,

I actually just made it throughout one day with my best friend and we used a lot of scotch tape, a lot of... satin wiring to hold the dress together.

The dress is now up for auction on GoBid.

All proceeds will be donated to The Malala Fund.