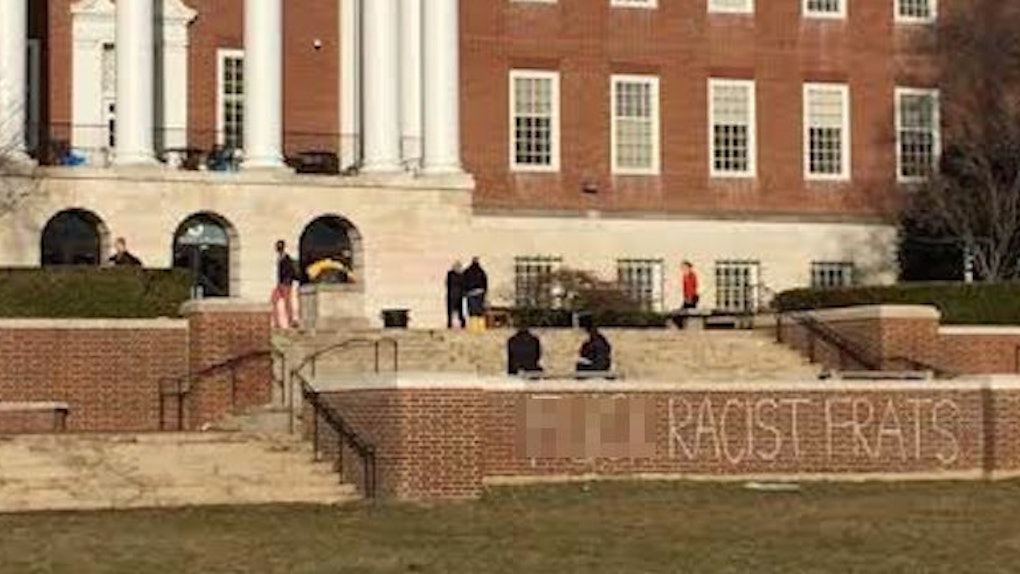 Another day, another fraternity gets exposed for bigoted and racist comments.

An email sent by a member of the Kappa Sigma fraternity at the University of Maryland was leaked that contains some horrifically vulgar words.

In it, the undergraduate student bashes several minorities, encourages his peers to get "ratchet as f*ck" during their rush week, and even promotes raping any girls who won't have sex with them at their party.

The national fraternity was quick to distance itself from the email, which is dated about 14 months ago. Kappa Sigma said in a statement,

The language and views expressed in the email were inexcusable and are in stark contrast to the values of Kappa Sigma Fraternity. They are counter to everything Kappa Sigma stands for. This action by a single individual is in no way representative of the culture or diversity of Kappa Sigma's chapter at the University of Maryland.

It may just be me, but doesn't that sound awfully similar to the Sigma Alpha Epsilon statement that came out after the University of Oklahoma chapter was caught on camera chanting racial slurs? That statement reads,

We apologize for the unacceptable and racist behavior of the individuals in the video, and we are disgusted that any member would act in such a way.

What's interesting in these instances is that both national organizations denied having any part in creating a culture that breeds racism and bigotry. It's understandable they'd have no idea this type of outward racism was occurring on their watch.

But to deny any possibility that fraternities in the United States can create a somewhat closed-minded and perhaps culturally unaccepting environment is just plain irresponsible.

This isn't to say every single frat member is a racist, though. In fact, most are just like any other college student: open to new experiences, people and cultures.

Still, this is clearly a prevalent issue in Greek life across the states.

As an alumnus from the University of Maryland, I can say that this type of hate speech is not commonplace at the school. In fact, it's a pretty diverse community, with a lot of progressive thinkers.

And the fact they decided to chalk the front of McKeldin Library with a sign that reads "F*ck Racist Frats" just goes to show people are ready for some major changes.

Nobody should have to hear this type of garbage anymore. In my opinion, Maryland needs to strip the frat of all of its privileges.

Maybe then racists and bigots like this assh*le wouldn't be so damn loud.