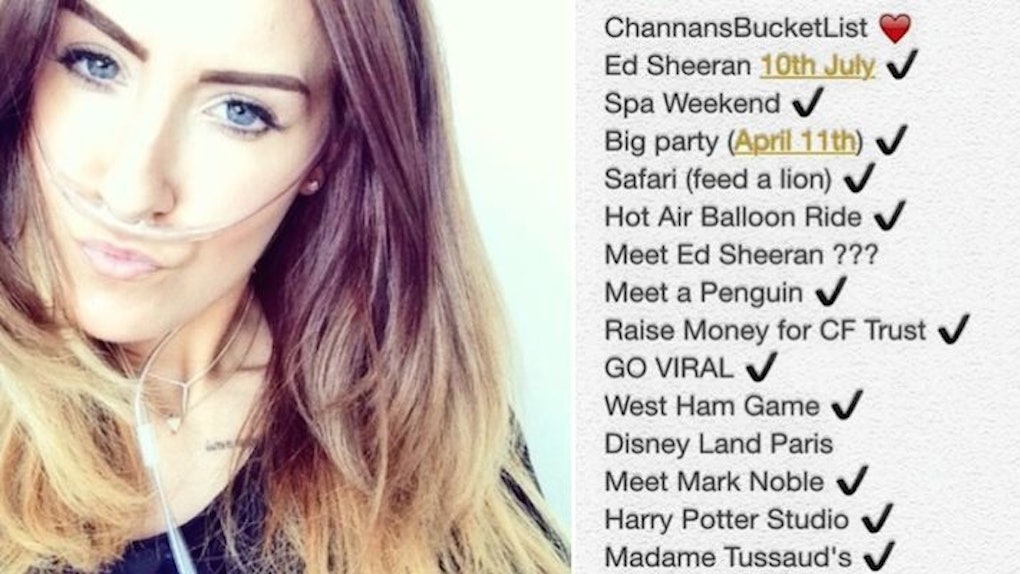 What would you do if you knew you only had one year to live?

This is the question 22-year-old Channan Petrides asked herself when doctors told her she only had about a year left to live.

Petrides has cystic fibrosis, a disease that causes your lungs and digestive system to become filled with thick mucus. According to Channan, it feels like "having a plastic bag over your head and breathing through a straw."

After weighing the risks associated with an organ transplant, Channan ultimately decided to forgo a new heart and lungs for a chance to enjoy the time she has left and complete her bucket list.

Nobody could say for sure that the transplant would work, and I wouldn't have been able to do anything on my bucket list because of risk of infection. If it brought me another twenty years, of course I'd do it, but doctors told me there was a chance I'd die on the operating table or my new organs would fail after just six months.

Channan made her bucket list last November after having a close call with a severe chest infection, and since then, she's checked a lot off her list.

Her bucket list has been gaining a lot of attention online, and she's hoping to use this as an opportunity to live out her dreams while educating others about her terminal disease.

Channan is a dying 22-year-old who suffers from cystic fibrosis.

After doctors told Channan she had just one year left to live...

...she decided to pass up the chance for a new heart and lungs so she could enjoy the time she has left by completing her bucket list.

Channan has slowly been ticking all sorts of things off her list since November. But her biggest goal is to walk the red carpet at the BRIT Awards.