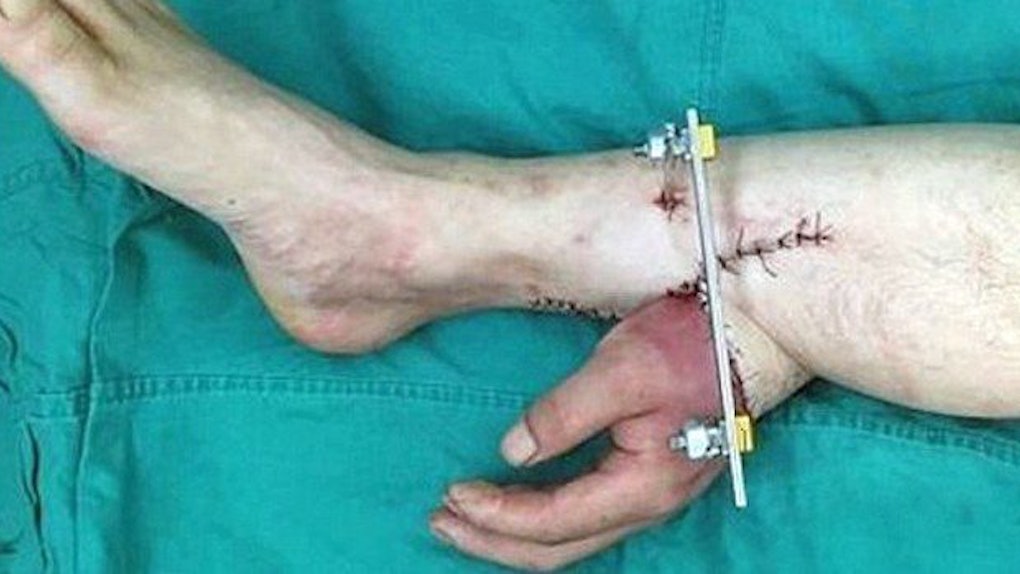 A Chinese man's severed hand was kept alive by being attached to his ankle for several weeks.

According to Daily Mail, the man known as Zhou lost his left hand in an accident involving a spinning blade at the factory where he works.

My mind went blank at that moment, and I just thought that I had lost one hand.

Dr. Tang Juyu of the Xiangya Hospital in Changsha, China determined Zhou's hand could only be reattached when the injured nerves and tendons in his wrist healed, Medical Daily reports.

So, the microsurgeon and his team attached the hand to Zhou's right ankle, allowing the hand to receive blood from the leg's arteries.

In normal temperatures, a severed finger should resume blood supply within 10 hours. The time is even shorter for a separated limb. If it falls short of blood for long, the tissues dies and it would be impossible to get it back.

The hand was grafted onto the ankle for over a month and then reattached to Zhou's arm in an extremely complex procedure lasting 10 hours.

Zhou is currently able to make minute finger movements, but he will reportedly not have full use of his hand until he completes a significant amount of rehabilitation.

This was at least the second time Dr. Juyu and his team grafted a severed hand onto an ankle.

The previous patient, who lost his hand in a work accident in 2013, also required a month of healing before the limb could be reattached.

Citations: Mans severed hand is grafted to his LEG for a month to keep it alive before doctors successfully re attach it (Daily Mail), Chinese Man Has Severed Hand Grafted To Ankle For Blood Supply Prior To Reattachment Surgery (Medical Daily)