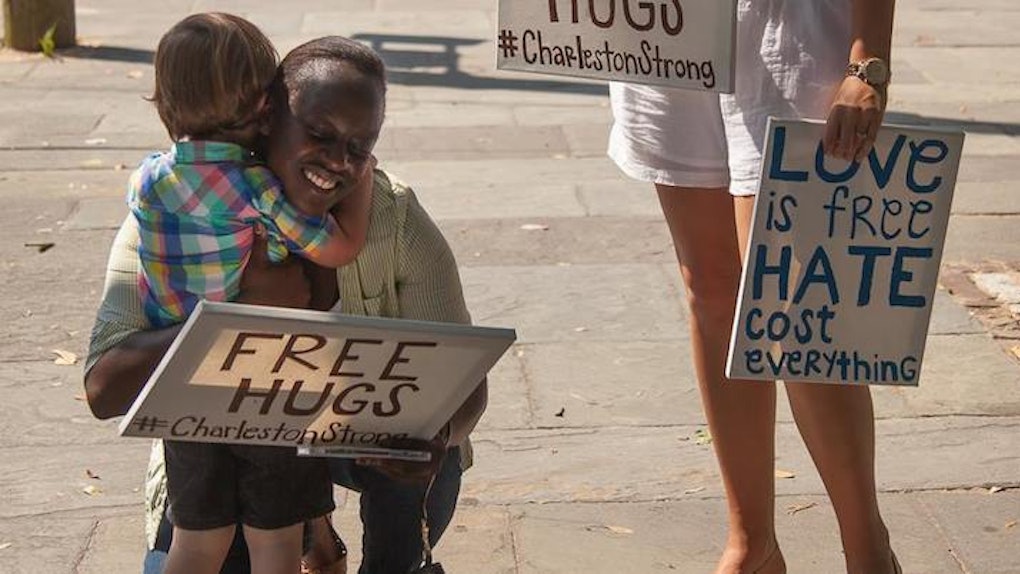 That's the message behind one inspiring photo captured in the days following the brutal murder of nine African Americans at the Emanuel AME Church in Charleston.

On Sunday, parishioners throughout Charleston and the surrounding area took to the city streets to participate in a gathering, dubbed “Charleston United,” honoring the victims of the shooting.

At the gathering, local photographer John Nettles snapped an image of his 3-year-old white son and a black South Carolinian woman sharing a tight embrace.

The woman, later identified as Taylor Willis, was protesting the shooting with "Free Hugs" signs.

When Nettles' son Parker saw the signs, he immediately ran toward the women, hoping to be a part of something special.

Nettles posted the image on Facebook, where it's since racked up more than 2,400 likes.

In an update to the original post, Nettles wrote he'll be providing free high-resolution prints of the powerful photograph for anyone who wants one.

Nettles told The Huffington Post while his son certainly doesn't understand the meaning behind the hug, he does understand meanness and hatred -- and even at a young age, he won't stand for it.

Neither, it seems, will Charleston.

The way my city has responded to the hate is something I haven't seen in a long time and I think it's the start of something greater in this country… I'm so glad Charleston is responding this way because it's showing my son and every other child that love conquers hate and in return we're securing a better tomorrow through our strength today.

I couldn't have said it better myself.