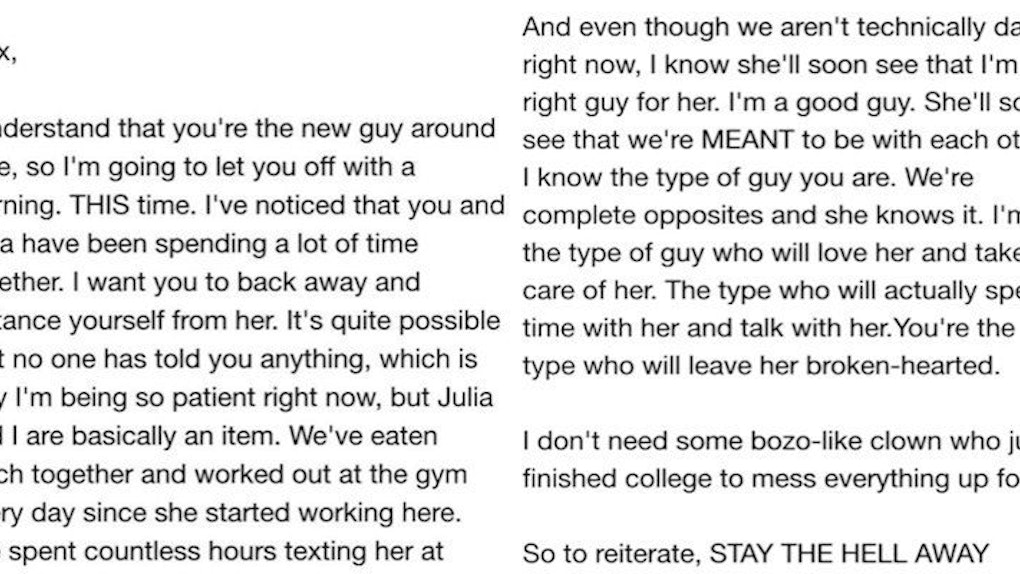 Stage 5 Clinger: Guy Got A Beyond Creepy Email From Obsessed Coworker

Every person has, at some point or another, had that creepy coworker who's just a little too friendly — thankfully, he or she is usually pretty easy to avoid (and/or ignore).

But even the worst of the worst doesn't compare to this dude and his freakish obsession with his female coworker.

Here's the (alleged) backstory: Apparently, the subject of the below email recently began working at a new office and was, rightfully, trying to make friends with his new coworkers, one of them, a woman named Julia.

A male coworker noticed his interest in her and decided it wasn't OK. He was under the delusion Julia was his.

And so, in proper psychopath fashion, he sent the new guy an email warning him to back the f*ck off from his girlfriend stalking victim.

Needless to say, it was weird:

There's a huge part of me that hopes this is all a sick joke, but I know, in my heart, it is not.

Good luck at the new job, dude. I suggest you buy some pepper spray.

Citations: Check out The Insane Email This Guy Got From A Coworker He Never Spoke To (Playboy)