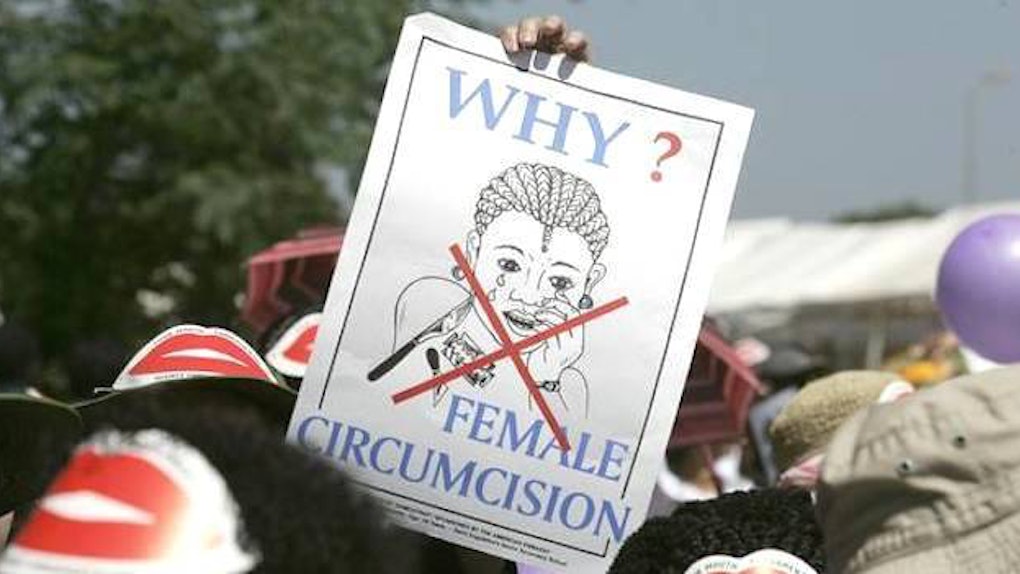 Why The Conversation On Female Genital Mutilation Needs Our Attention

If you type into Google, “Kim Kardashian second baby,” 7,220,000 results are immediately produced.

Yet, if you type in “Nigeria bans female genital mutilation” (both events having taken place around the same time), there are only 234,000 results.

Theoretically, that sounds like a lot, but by comparison, it is absolutely nothing.

Thus, we have a greater interest in Kim and Kanye West extending their lineage than a huge and fundamental decision in the imperative fight against female genital mutilation (FGM).

According to The Huffington Post, in May of this year, Nigeria’s former president outlawed the practice of female genital mutilation throughout the nation.

Nigeria accounts for approximately a quarter of female genital mutilation cases worldwide, but it's also the first country to officially outlaw the act.

And while there is still serious work to be done, this move is a significant signal of hope in the fight against widespread, unfathomable gender inequality.

Perhaps, as media consumers, our priorities are off-balance.

FGM is an umbrella term encompassing a host of practices all effectively aiming to supplant and intentionally destroy the sexual identity of young girls and women.

As reported in The Guardian, it usually involves removal of outer female genitalia, either partially or completely.

It is barbaric. It is torture. It is inhumane. And, it needs to come to an end.

But, according to the World Health Organization, 125 million girls and women living today in 29 countries in Africa and the Middle East, where FGM is concentrated, have been victimized by this dated and heinous practice.

Equality Now also estimates that annually, 2 million girls (or around 5,500 girls every day) are subjected to the horrifying procedure.

FGM cannot in any way be validated or legitimized from a medical standpoint.

Following the procedure, what is left of a woman's genitals is often vulnerable to infection, shock, infertility, excruciating sexual intercourse, ongoing and outright agony.

FGM is a tragic consequence at the hands of the extreme gender inequity that engulfs certain regions of the globe.

It is internationally viewed as a human rights violation, but some cultures and societies believe it is a necessary step in raising a "proper" daughter and "faithful" wife.

With these skewed views of gender, women are simply not valued as highly as men, and they are, therefore, denied the right "to health, security and physical integrity, the right to be free from torture and cruel, inhuman or degrading treatment, and the right to life when the procedure results in death."

So, why aren’t more people listening? How is it that, according to a leading search engine, we are so incredibly consumed with the joyous pregnancy of one woman?

But yet, on the other side of the world, we continue to ignore the realities of a practice so heinous it makes its victims' childbirths inconceivably painful experiences.

It is because FGM is an uncomfortable topic. It is too taboo to touch, and ignorance is bliss.

But, this is a conversation that needs to be had.

This is not, in any way, to suggest individuals from all of over the world – women, men, politicians, journalists, activists and so many more – are not playing their parts in this crucial plight.

In 2012, the United Nations banned FGM worldwide and adopted a resolution to see the practice eliminated.

Organizations and publications from all corners of the globe continue to work tirelessly to sanction and advocate against this inhumane crime.

But, the mainstream media has failed tremendously, time and time again, to bring this issue into the spotlight and generate the attention it ultimately deserves.

These women are undeniably entitled to the same rights anyone reading this was (most likely) granted by virtue of birth.

Yet, what we take for granted others are far too often denied.

We are desensitized and disillusioned, falling pray to a warped perception of what really matters within the walls of our own globe.

“What is encouraging is that we are talking more and more about FGM. This is crucial to break the taboos around the subject and to help ensure that, in future, girls can live free from the risks it brings.”

We need to reorientate the compass and focus on what deserves our attention. Because, in the end, you can’t help to put an end to something you know absolutely nothing about.