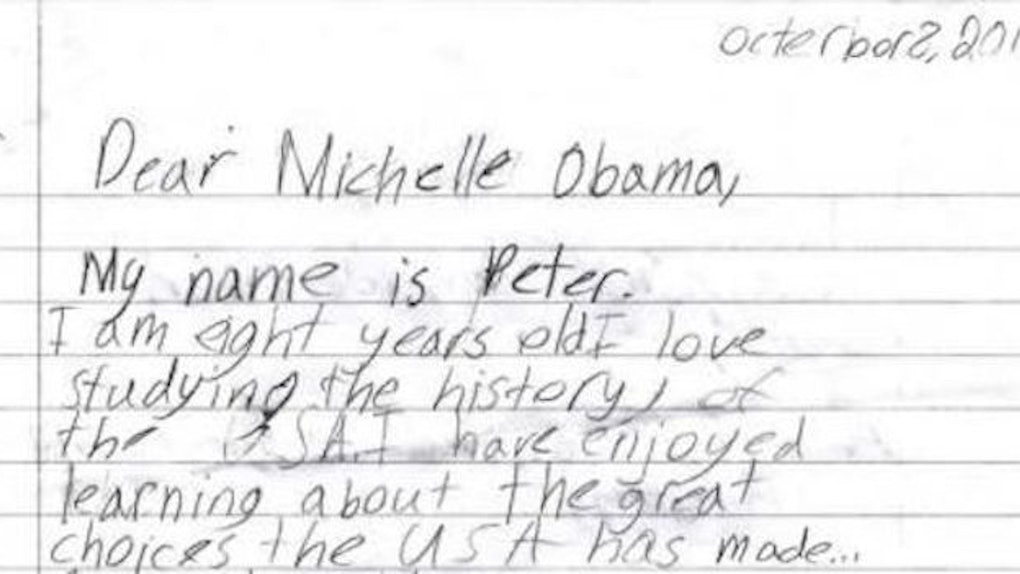 An 8-year-old boy has written a letter to Michelle Obama critiquing several controversial policies, most notably the amount of ketchup that can be offered in school lunches.

The boy's father scanned the letter and emailed a copy to the conservative blog The Weekly Standard after he found it on his son's desk.

The father said that his son, Peter, was motivated to address the First Lady after seeing a report saying she supports the implementation of strict caloric limits on school lunches.

That story also said kids might, therefore, only be allowed to use one packet of ketchup because two would exceed the meal's calorie limit.

Peter began writing as soon as he was informed of this atrocity.

His father told The Weekly Standard,

He started it in October, but did not finish it until a couple weeks ago. He said he was 'too angry' to go on.

The letter begins with Peter declaring the US had made "great choices" before electing Barack Obama.

I have enjoyed learning about the great choices the USA has made... And then their [sic] was your husbands [sic] election. I think you should rethink your idea that takes us to one ketchup packet per meal. I feel that it is taking away our patriotism toward Amercia.

The boy then suggests the president take more action in the Middle East and change the way he speaks to the nation.

I also think you should stop doing nothing and go send some troops to the Middle East. I also think your husband needs to work on his speeches. He also disipionted [sic] millons [sic] of Americans by not bombing Syria.

Peter even mentions the Islamic State and unrest in Ukraine before ending his letter, which he signs "A concerned 8 year old [sic] citizen."