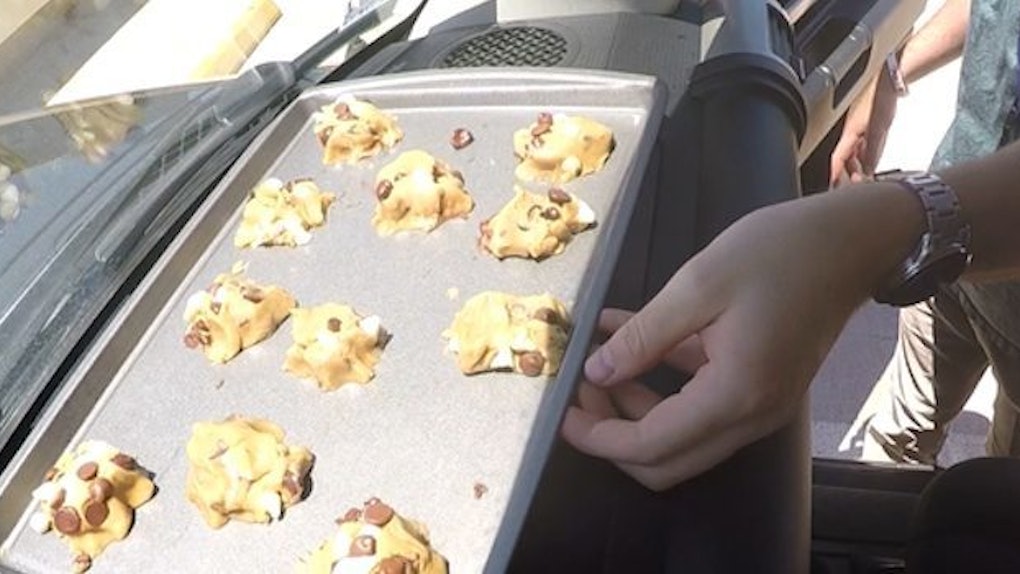 It's So F*cking Hot In Arizona, People Baked Cookies On A Car Dashboard

Summer may have only (officially) started three days ago, but it's already shaping up to be a record-breaking season.

Case in point: Just last week, Arizona was hit with a heat wave so intense, members of a local news crew actually baked cookies in a car.

On Thursday, when it hit 115 degrees in Phoenix, 12 News decided to test out the hyperbolic expression,

It's so hot, I could fry an egg on the sidewalk.

But instead of cooking an egg, the crew decided to make something infinitely more delicious: chocolate chip cookies.

The team of experimenters parked a car in the sun, put a tray full of raw cookie dough on the dashboard and set a timer to see how long the cookies would take to cook fully — if, that is, it worked at all.

The experiment began at 1:30 pm, when the sun was strongest, and by 5:45 pm, the sweaty scientists were rewarded for their efforts with a tray full of soft, gooey and fully-cooked cookies.

The crew filmed the tasty test and edited the footage down to a short video you can watch below.

While the experiment itself was simply for fun, 12 News hopes it will remind viewers how blisteringly hot cars can get in the summer — too hot, it insists, for any person or animal to withstand for any extended period of time.