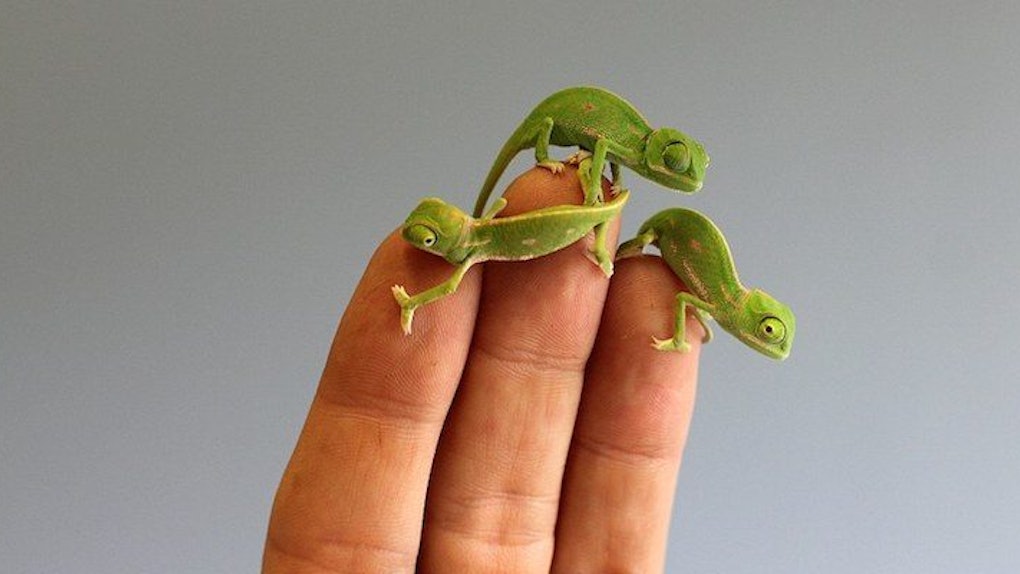 Tiny Newborn Chameleons Are The Surprisingly Adorable Pet You Want

It's an awfully big world out there for 20 newly hatched chameleons. These tiny, green lizards are so cute, you'll forget you don't like scales.

According to a press release from Sydney's Taronga Zoo published earlier today, the veiled chameleon babies measure a little under 2 inches long (5 cm).

The temperature-sensitive hatchlings, native to hot locales like Saudi Arabia, are currently being kept in a controlled area away from visitors.

And these little guys, who will live at Taronga for several months, aren't just notable because they're cute.

They're the first of their kind born in the zoo in five years.

As a result, those same visitors may be more likely to support conservation causes.

Michael McFadden, one of Taronga Zoo's reptile supervisors, explained in a statement a chameleon can begin shifting color when it's about 1-year-old.

Right now, these little guys are stuck between brown and shades of green.

They don't seem too upset about it.

They're reportedly enjoying a steady diet of crickets, snatched up with tongues that are one and a half times the length of their bodies.

They have awfully big shoes to fill at zoos across Australia.

Citations: They are bright green, adorable and so tiny that they fit on the end of a finger or pencil: More than 20 baby chameleons make a big impression after hatching at Taronga Zoo (Daily Mail)