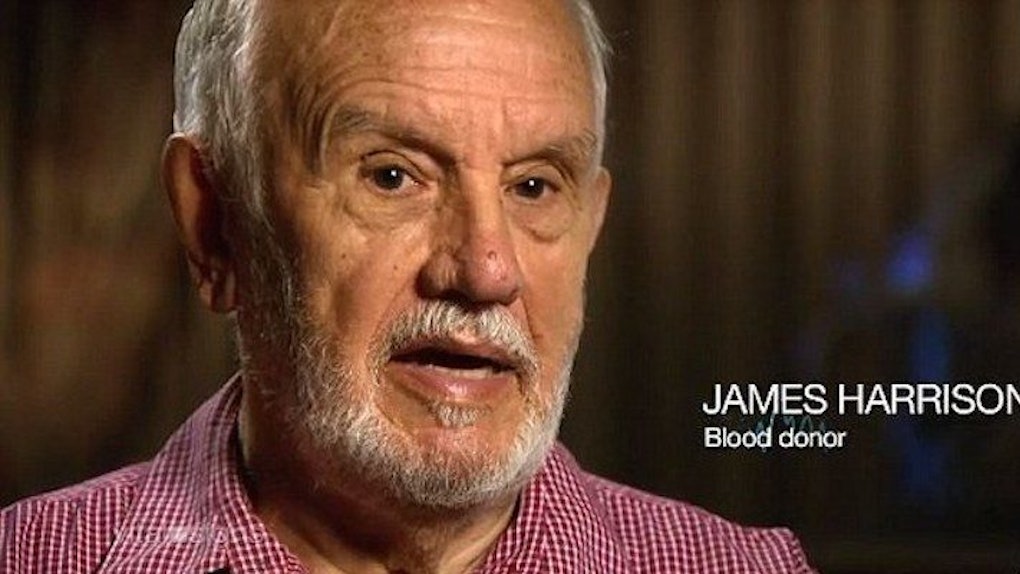 There may be no one on Earth whose blood is more important than that of Australia's James Harrison.

The 78-year-old possesses an extremely rare type of plasma that allowed hundreds of thousands of women to have healthy children, according to Daily Mail.

When he was 14, Harrison had his lung removed in a life-saving operation involving 13 liters of blood from strangers.

This inspired him to become a donor as soon as he turned 18.

Shortly after, doctors informed Harrison he had an antibody in his blood that could be used to develop a treatment for a sweeping disease.

In Australia, up until about 1967, there were literally thousands of babies dying each year, doctors didn't know why, and it was awful. Women were having numerous miscarriages and babies were being born with brain damage.

The cause was Rhesus disease, which occurs when a pregnant woman has Rhesus-negative blood and her unborn child has inherited Rhesus-positive blood from his or her father.

Antibodies in the mother's blood attack the blood cells of the baby, who then faces brain damage or even death.

But with the help of Harrison's plasma, doctors were able to create Anti-D, an injection that stops pregnant woman with Rhesus-negative blood from developing the hazardous antibodies.

The treatment is credited with saving the lives of over two million babies.

Every batch of Anti-D that has ever been made in Australia has come from James' blood. And more than 17 percent of women in Australia are at risk, so James has helped save a lot of lives.

Now known as "The Man with the Golden Arm," Harrison has donated blood nearly every week for the past 60 years.

Among the recipients of Anti-D is Harrison's daughter Tracey; she was injected after having her first son.

Harrison's arm was insured for about $768,370 during the initial donations.

What makes him even more admirable, however, is how squeamish he is toward the donation process.

Despite donating over 1,000 times, Harrison says he never watches the needle enter his arm.

Citations: Man with the golden arm has saved over TWO MILLION babies by donating his rare type of blood thousands of times (Daily Mail), This mans blood has saved the lives of two million babies (CNN)