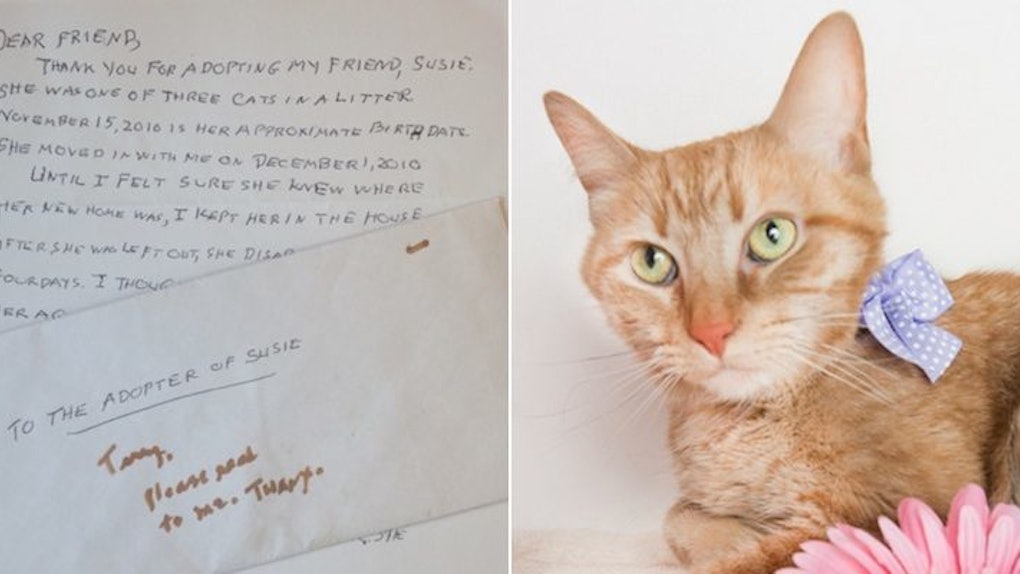 Of all the cats in all of the shelters in Maryland, there is but one who comes with a letter of recommendation from its previous owner.

Susie, a skittish 5-year-old cat, was carried into the Montgomery County Animal Services and Adoption Center in May by the son of her late owner.

Along with the orange, striped feline was a note, written by her owner before she passed, telling whomever may own Susie in the future of the cat's habits, personality and brief outdoor adventures.

The former owner shared how Susie was wary of the owner's dog and preferred to live her life indoors, and she promised Susie makes a quality companion, despite taking some time to warm up to people.

Susie is unusual but I enjoy her company. She is a good snuggler, but she likes to be the boss. She enjoys being petted. She spends much of her time on my bed but always seems to know where I am. I hope you enjoy Susie as much as I have.

Adoption center staffer Katherine Zenzano claimed, initially, Susie's shy nature made it difficult for her to adjust to her new surroundings at the shelter.

The cat attempted to escape, hid from staff and, just as the letter promised, took a long time to warm up to her caregivers.

Zenzano hopes the shelter will not be Susie's home for much longer.

If this letter can in any way help Susie, or any other cats in the same situation, we are happy to get it out there because we think it can touch a lot of people.

According to the adoption center's Facebook page, Susie is still looking for a home.

Read her previous owner's full letter below, and hug your cat mercilessly for good measure.