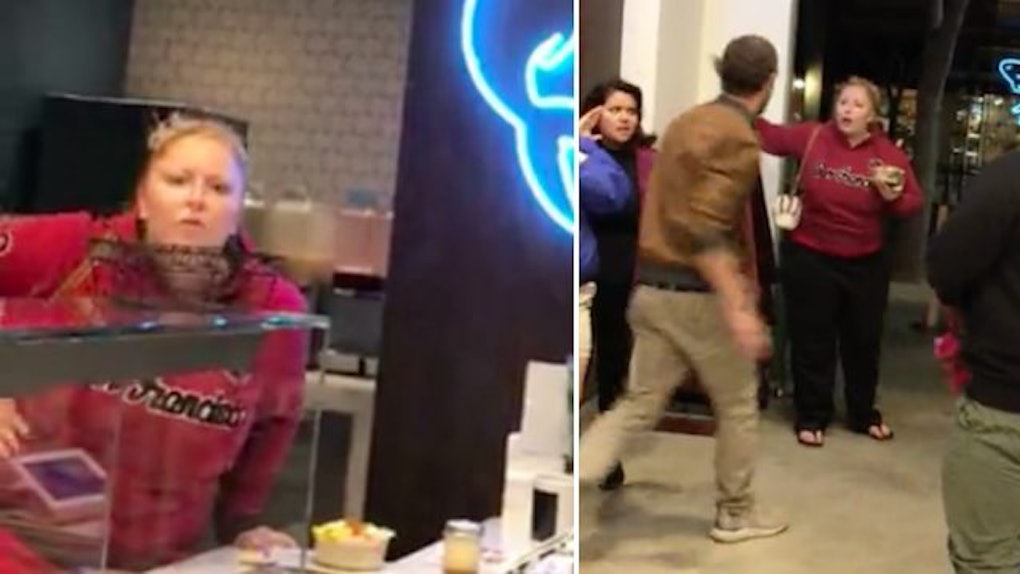 Is showing your lover a little PDA a crime?

A woman in Santa Monica, California certainly acted as if it were after she freaked out on a couple for kissing in public. According to Wet Paint, the incident occurred on March 31 at a poke bowl restaurant.

Luckily for us, the entire heated exchange was caught on camera.

The shocking footage surfaced after the boyfriend of the woman being kissed inside the restaurant took to Reddit, saying,

I had my arms around her from behind and maybe kissed her on the top of the head once or twice, but that was the extent of it.

Apparently, a woman wearing a red San Francisco sweater didn't like that sliver of PDA one bit.

She totally lost her cool and began complaining to the cashier, saying,

I feel very uncomfortable. They're like making out. I feel sexually harassed.

The boyfriend then responds, firing back,

Then leave. Why are you here? You have your food...

As expected, that exchange only caused things to escalate. The anti-PDA woman became increasingly angry and aggressive by the second. She repeatedly told them to "get a room."

Finally, the guy's patient girlfriend just couldn't be patient with the anti-PDA lunatic any longer. She told her they're waiting for her to finish up so they can continue placing their order.

The woman then commanded them to "go make out outside." That's when things got FUCKING LIT in the worst way. The guy's GF responded by telling the woman she was a "heinous person."

As you can probably imagine, things just got worse and worse from there. I mean, what I just described was merely 25 seconds worth of a six-minute video clip you HAVE to see.

Check out the moment a woman slut-shamed a couple for kissing in public at a restaurant in Santa Monica.

Intense, right? I don't even know how I would have reacted if I were any one of the people tasked with defending themselves against that absolute poke-loving, PDA-hating tyrant.

But wait, there's more... The folks over at Wet Paint uncovered a shocking discovery about the anti-PDA woman. According to the website, some genius on the internet was able to identify the woman and she's allegedly a cam girl.

An internet good Samaritan has uncovered the profile of a woman named Anna Storelli, who bears a striking resemblance to the woman seen calling another restaurant patron a "slut" and "prostitute" for some innocent PDA with her boyfriend.

Do you see the resemblance?

And this is the lovely woman seen in the video.

After a bit of investigative research using the name Anna Storelli, we found a Facebook page for the alleged cam girl.

We also found out this woman is a huge San Francisco sports fan.

If this is, in fact, anti-PDA lady, this is the greatest plot twist of all time. Kanye would agree.

Think about it: This woman is calling another woman a "slut" and a "prostitute" for kissing her boyfriend in a public setting, yet she might be taking her clothes off for creepy dudes on the internet.

There's nothing wrong with that, though. She has every right to live the cam girl lifestyle she may very well live. Why? Because slut-shaming is for weak-minded LOSERS.