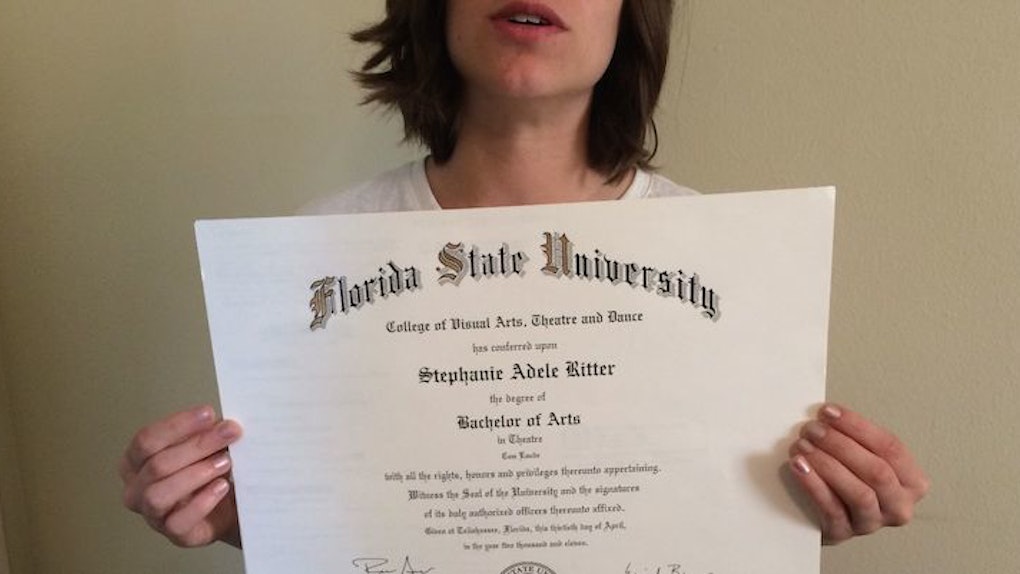 Woman Is Selling Her College Diploma For $50,000 So She Can Pay Loans

A Florida State University graduate is hoping her college diploma is worth more than the actual degree she received.

Just like college graduates everywhere, Stephanie Ritter was hit hard by reality after she left the hallowed halls of her college to seek employment in the real world. Ritter graduated from FSU in 2011 with a degree in theatre, but she now works as an assistant and is understandingly frustrated with her decision.

I thought this piece of paper has so much worth to so many people, but for a theater major, it couldn't mean less. I'm doing the exact same things and probably getting paid the exact same amount as people that dropped out halfway through freshman year, except I'm still $40,000 in debt and they're, well, not.

After cleaning her room one day, Stephanie came across her degree and thought of a way to turn $40,000 worth of lemons into debt-free lemonade on eBay.

For the low fee of $50,000, you can now purchase Ritter's “Mint Condition Diploma" on eBay, and if you purchase it with the “Buy It Now” option, Stephanie will give you the “FULL FLORIDA STATE EXPERIENCE.”

According to the listing on eBay, the full FSU experience includes (but is not limited to),

- A TOUR of Florida State University including everywhere you would have gone/eaten/partied in your four years at FSU. (Possibly includes but not limited to: Suwanee Hall and a possible Ms. Killings sighting, Jimmy Johns, Mr. Roboto, dinner at Cool Beanz, burgers & beers at Monks, drinks at Poor Pauls) - Access to all of my college memories/Facebook albums for 6 months! (access to any memories by phone or text between 10-7 Sunday-Thursday so you can give someone the most authentic specific memories straight from my brain to their ears)

This whole situation should come as no surprise, though, as the Federal Reserve Bank of New York reports only 27 percent of graduates actually work in fields related to their degrees.

Stephanie said, even though she's going through employment problems, she would still do her college experience again -- though maybe not at FSU.

In order to avoid crazy amounts of debt, Ritter suggested incoming college students be more wary of loans and maybe even try sending unsolicited letters to rich people asking them to sponsor their educational journeys.

If this whole eBay plan doesn't work out, Stephanie is hoping “a very rich family would adult Daddy Warbucks [her]." And if that bullet-proof plan doesn't pan out, she's planning on waiting 25 years until the government takes pity on her and wipes away the debt.

I gotta get myself a Daddy Warbucks.

Citations: This woman is selling her university degree for 50000 (The Telegraph)