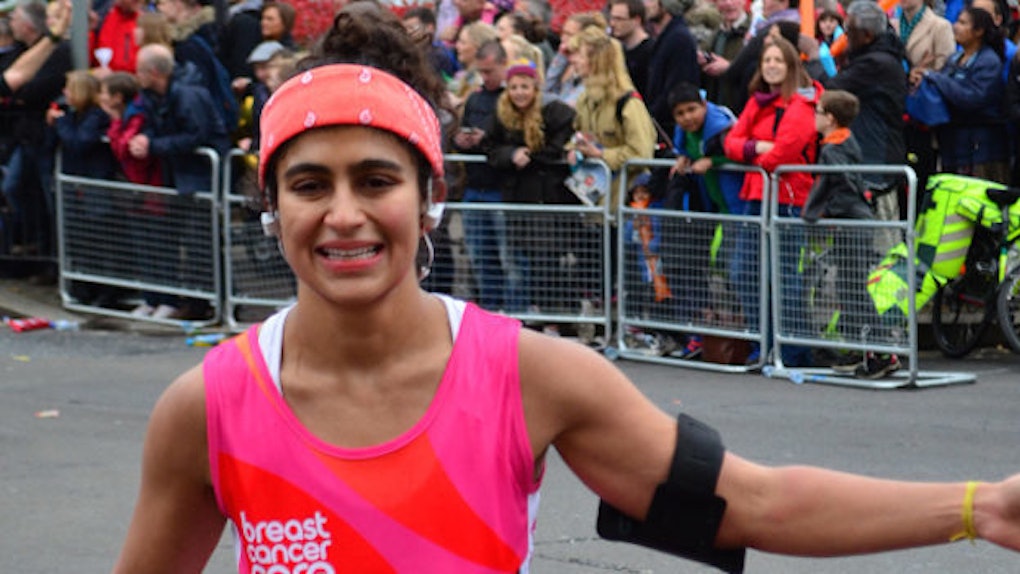 Woman Runs Entire Marathon Without A Tampon To Protest Period-Shaming

Kiran Gandhi toured as a drummer for M.I.A. and Thievery Corporation, received her MBA from Harvard Business School and, most recently, ran 26.2 miles with her period, bleeding uninhibited the whole way.

In an interview with Cosmopolitan, Gandhi says she trained for a year leading up to the April marathon but took breaks while menstruating.

So, when the day of the marathon arrived and coincided perfectly with her time of the month, the 26-year-old had a decision to make.

They tell you that for men, their nipples will bleed because of the chafing between their shirts and their skin. I worried that a tampon might have the same effect… Last year, my friend had run expecting to get her period. She actually put a little tampon inside her bra just in case she got her period. By doing that, to this day, she has a little scar on her breast because the tampon caused her to chafe. That also made me not want to run with a tampon.

Concerned more with her own well-being than the opinions of strangers, Gandhi chose to run free and allow the experience to liberate her.

Once I started bleeding, I felt kind of like, 'Yeah! F*ck you!' I felt very empowered by that. I did.

Gandhi powered through without letting anything -- including her nerves over passing her father and brother and an encounter with a fellow runner who commented on her bleeding -- keep her from finishing the race.

She focused on the fact that she was running to benefit breast cancer research and hoped others would focus on that, too.

Her family remained supportive, and the run destigmatized a monthly occurrence for Gandhi and, hopefully, for those who witnessed her decision.

The marathon initiate hopes not to belittle the experience of menstruation but normalize it as a shameless routine.

For Gandhi, the marathon gave her a taste of the support and rational thinking both genders can use to better understand the small battle women face, seemingly unfazed, every month.

Men and women alike, they get it. That is my favorite part about this whole thing, that people are remembering that women have this thing that they have to deal with. For some people, it isn't a big deal, and for other people, it is. It's amazing that every month, they clean it up, and every month, they act like they aren't in pain when they are. That's a big f*cking deal.

Gandhi has not decided whether she will be running another marathon any time soon, but surely she can take comfort knowing her first attempt was a win for women everywhere.