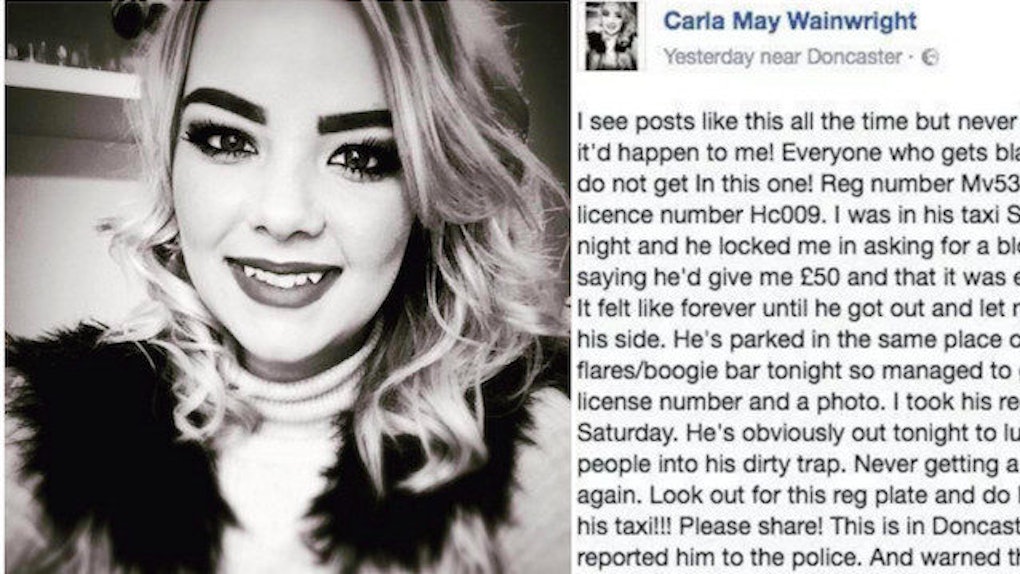 Carla May Wainwright, 19, claims the man locked the doors during her journey in Doncaster, UK, and offered her $60 to perform oral sex.

The incident took place at around 3 am on Sunday, January 8.

She said he appeared friendly at first, asking her about her night out and what she does for a living. But then the man allegedly asked if she sent "private messages" and made a hand gesture.

She said it "felt like forever until he got out and let me out of his side."

Carla went back to the same spot she got picked up at the following night, found him waiting in the same area and snapped his photo.

I took his reg plate on Saturday. He's obviously out tonight to lure more people into his dirty trap. Never getting a black cab again. Look out for his reg plate and do NOT get in his taxi!!! Please share! This is in Doncaster! I have reported him to the police. And warned the bouncers in the surrounding area to not let anyone get in it!

South Yorkshire Police said it is aware of the Facebook post and said a woman has planned to come in and talk about the incident to help aid the investigation.

A spokesperson added the force is liaising with the council and taxi licensing, who have also been made aware.

Citations: Woman 'locked in taxi by driver who asked for a blow job' (Metro)