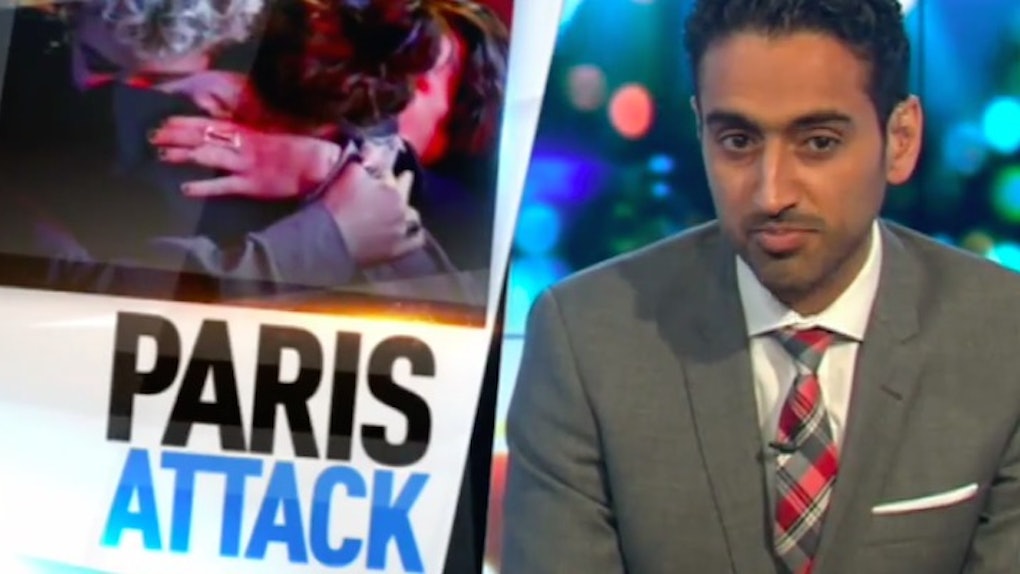 While politicians in the US are busy spreading hateful messages and denouncing Muslims and refugees, Aly offered a much-needed call for unity as well as important perspective on ISIS (also known as ISIL, the Islamic State and Daesh) and its objectives.

People are hurting right now; they are scared, they are angry and they want someone to blame for the attacks. Aly acknowledged all of this, but aptly stated,

We are all feeling a million raging emotions right now. I am angry at these terrorists. I am sickened by the violence and I am crushed for the families that have been left behind, but, you know what, I won't be manipulated. We all need to come together. I know how that sounds. I know it's a cliche but it's also true because it's exactly what ISIL doesn't want. So if you're a member of Parliament or a has-been member of Parliament preaching hate at a time when what we actually need is more love, you are helping ISIL. They have told us that. If you are just someone with a Facebook or Twitter account firing off misguided missives of hate, you are helping ISIL. They have told us that. I am pretty sure that right now none of us wants to help these bastards.

Indeed, ISIS wants to spread disunity, which is precisely why our greatest weapon against these terrorists is solidarity.

We can't blame all Muslims for the abhorrent acts of a small group of extremists. We can't ignore the plight of refugees, who are running away from terrorism, because we've allowed cowardly individuals who attack civilians to instill fear in our hearts.

ISIS wants to split the world in two, but we can't let it.

Aly reminded us ISIS wants to us to be afraid and hostile, and it's not as powerful as it wants us to believe.

We must remember that Islamophobia is what ISIS wants. It confirms their narrative that the West is waging a war on Islam. — Christina Lavingia (@CLavingia) November 16, 2015

He noted ISIS wants us to fear Islam, as it wants to be seen as a legitimate representative of the world's 1.6 billion Muslims (but it's not).

Anti-Islam sentiment on my feed won't be tolerated. ISIS is no more representative of Islam than the KKK is of white people. — Chuck Wendig (@ChuckWendig) November 14, 2015

The President talking about how anti-muslim efforts and feelings will increase the reach of ISIS was so important. — Elizabeth Plank (@feministabulous) November 16, 2015

He warned ISIS wants the West and other countries to see Muslims as enemies; it's part of its strategy. But the fact is, ISIS has killed more Muslims than any other group.

If anything plays into ISIS' hands and propaganda.... https://t.co/BAfvL1GRcG — igorvolsky (@igorvolsky) November 16, 2015

Muslim victims represent the largest death toll by ISIS. If you're incapable of grasping that, you have no business reporting on this. — Sabrina Siddiqui (@SabrinaSiddiqui) November 16, 2015

Remember, the vast majority of those who died fighting Daesh have been Muslim. — Molly Crabapple (@mollycrabapple) November 14, 2015

Most of those killed by ISIS and most of those fighting ISIS are Muslims. Remember that when you collectively blame Muslims for ISIS' terror — Daniel Wickham (@DanielWickham93) November 14, 2015

It's very simple: If you don't want to help ISIS, don't contribute to hateful dialogue. This is precisely why Aly is calling for global unity. It's the opposite of what ISIS wants.

ISIS goal: create division, divide populations & push us all into a war of us vs them. Unity of Jews, Christian & Muslims terrify them. — Jolyon Rubinstein (@JolyonRubs) November 14, 2015

Aly's powerful message and plea for solidarity touched a lot of people and he's received widespread applause on Twitter.

Waleed Aly just brought me to tears. His address should be replayed over and over on the news-not clips of the attacks! #TheProjectTV — Annette Dittmar (@annette_dittmar) November 16, 2015

Waleed Aly unleashed on #ParisAttack - If you preach hate you help ISIL, their strategy is to divide us. https://t.co/LfqKG5DJr5 — Nadine Flood (@NadineFloodCPSU) November 16, 2015

Watch the video of Aly's poignant and potent speech below.

ISIL is WeakWaleed talks about how we can stop ISIL #TheProjectTVWritten by Waleed and Tom Whitty (@twhittyer) Posted by The Project on Monday, November 16, 2015

Citations: The Projects Waleed Aly praised for unity message in the wake of Paris attacks (SMH)