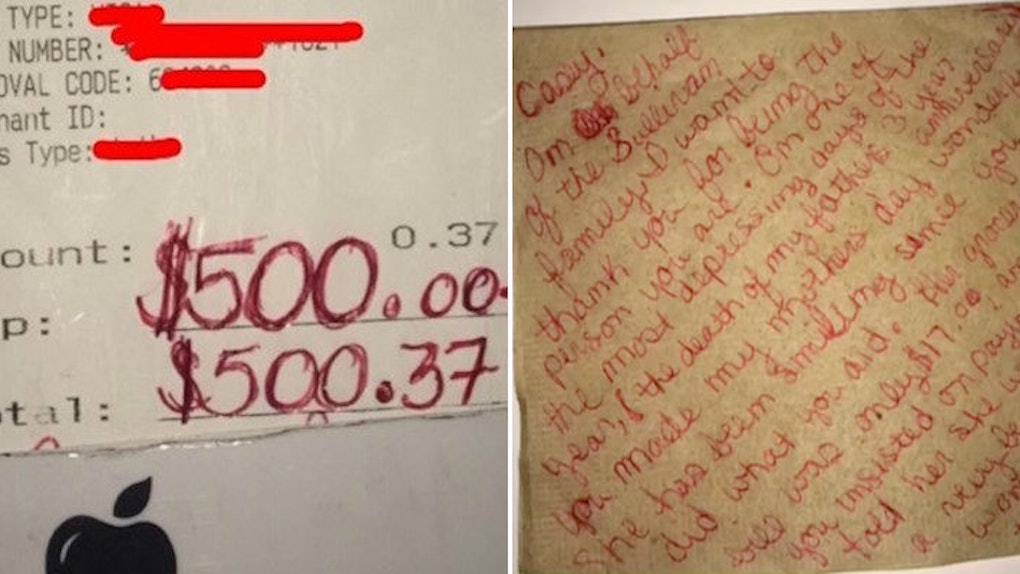 A Waiter Got A Huge Tip For A Random Act Of Kindness, So Karma's Real

This story is the perfect example for why we should try to help each other and be kind to one another.

Kasey Simmons, 32, was just having a normal day of work at Applebee's Neighborhood Grill and Bar in Little Elm, Texas.

But then, his day became anything but normal when, according to WFAA, Simmons received a $500 tip for a bill that was only 37 cents!

The customer left a note on a napkin explaining the tip for the presumably baffled server.

Apparently, the day before Simmons received the tip, he had helped a woman with her groceries at a Kroger supermarket. The woman looked upset, so Simmons approached her, complimented her and offered to pay for her groceries.

I insisted. It was only $17, but it's not about the money — it's about showing someone you care.

As it turns out, the customer who left the large tip was none other than the woman's daughter!

According to WFAA, the woman in the Kroger was upset over the three-year anniversary of her husband's death, so the daughter wanted to show some kindness to the man who was so kind to her mother.

The daughter explained on the napkin,

On behalf of the Sullivan family, I want to thank you for being the person you are. On one of the most depressing days of the year, (the death of my father, 3 year anniversary) you made my mother's day wonderful. She has been smiling since you did what you did. Her grocery was only $17.00, and you insisted on paying and told her she was a very beautiful woman.

This just goes to show that if you give kindness to people, especially in their time of need, you'll get the same kindness, and sometimes way more, in return.