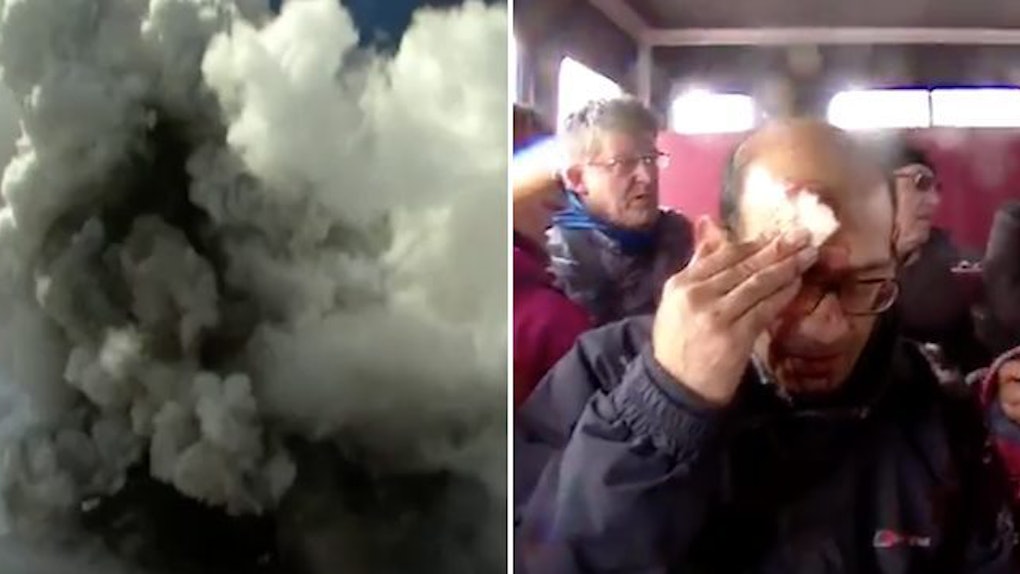 Volcano Erupts In Front Of News Crew And They Almost Died

A massive volcanic eruption of Mount Etna in Italy became a near-death experience for a handful of tourists and BBC news crew members on Thursday.

The crew had been monitoring the scene near the volcano's crater when it suddenly erupted causing everyone around it to run for cover.

While they were lucky enough to make it away sustaining only minor injuries, video footage captured just how dangerous the incident was.

According to BBC's global science correspondent Rebecca Morelle, the massive eruption was the second blast from the volcano they had witnessed. She said the first blast "didn't seem too bad."

The second blast, however, was the eruption that caused everyone to fear for their lives -- and rightfully so.

There were a reported 35 tourists around the volcano when it began to erupt the second time, making for a much more dramatic scene.

Running down a mountain pelted by rocks, dodging burning boulders and boiling steam - not an experience I ever want to repeat.

The BBC global science correspondent went on to describe the aftermath,

An estimated eight injuries logged by medical team here. An amazing 78-year-old lady was very close — but safely got away.

She went on to say nearby news crew members and tourists sustained "some head injuries, burns, cuts and bruises." Still, she says the eruption, and the end result of it, "could've been worse."

According to Mashable, a volcanologist with Morelle told her in his 30-year-career, the most recent volcanic eruption at Mount Etna was by far the most dangerous he's ever experienced.

Morelle went on to share an image of the damage done to her camerawoman's jacket.

Yikes! Well, that certainly helps describe how at-risk their lives really were.

Watch the terrifying moment a volcano erupted on Mount Etna in Italy causing over 40 people to run for their lives.

Um, yeah, that does NOT look like fun! The goods news is there were no deaths or major injuries. Phew! That was a close one... TOO CLOSE.

This is certainly not the first time this year Mount Etna has erupted. Check out the clip below from last month.