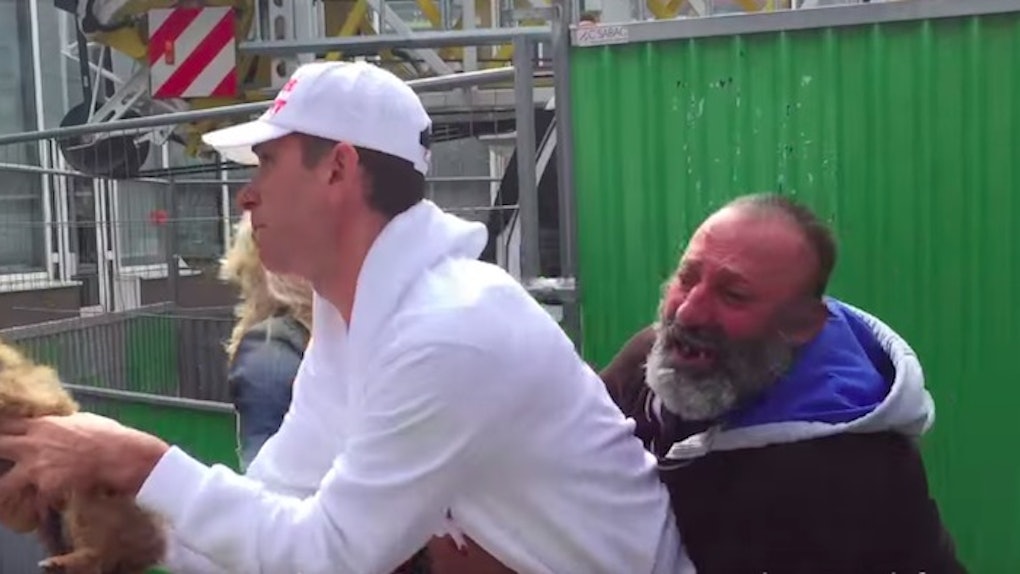 A new, and very disturbing, video of animal activists ripping a puppy out of a homeless man's arms caused worldwide outrage.

In the video, an alleged representative of the group known as Cause Animale Nord is seen holding the homeless man while another female representative snatches the dog away.

The trio is then seen wrestling on the ground for a moment before the activist pulls the crying puppy away and hands it off to another member of the group.

The homeless man is heard wailing while chasing the group down the streets of Paris in the hopes of retrieving his companion.

However, as the world soon learned, the dog was gone, possibly for good.

According to a new Change.org petition calling for the group to return the dog, which has been signed by over 220,000 people, the puppy is currently available for adoption for about $218.

We took (the dog) away from a Roma who was using it for begging. The police don't do anything, we act.

The group also claims the puppy had been drugged and its pupils were dilated when they took him.

While the group thought its intentions were good, its actions may have been misguided.

On any given night, there are about 640,000 homeless people living on the streets across the United States.

According to estimates, about 5 to 10 percent of those people are also sleeping on the street with a pet.

These animals, according to Dr. Marc Bekoff, a former professor and cofounder with Jane Goodall of Ethologists for the Ethical Treatment of Animals, are sometimes the lifelines homeless people need.

In a blog for Psychology Today, Dr. Bekoff,

Homeless people have told me on more than one occasion that their animal companion is their best friend and oxygen without whom life wouldn't be worth living. For many their animal friend is their only family.

The group Pets of the Homeless also notes on its site the homeless often "get a type of normalcy by providing food and water for their pets." And animals can "provide them with reality."

Instead of taking away pets, Pets of the Homeless recommends supporting this unique community by offering free veterinarian clinics, donating animal food and providing funding for crates.

Watch the video and judge for yourself (warning: disturbing content).