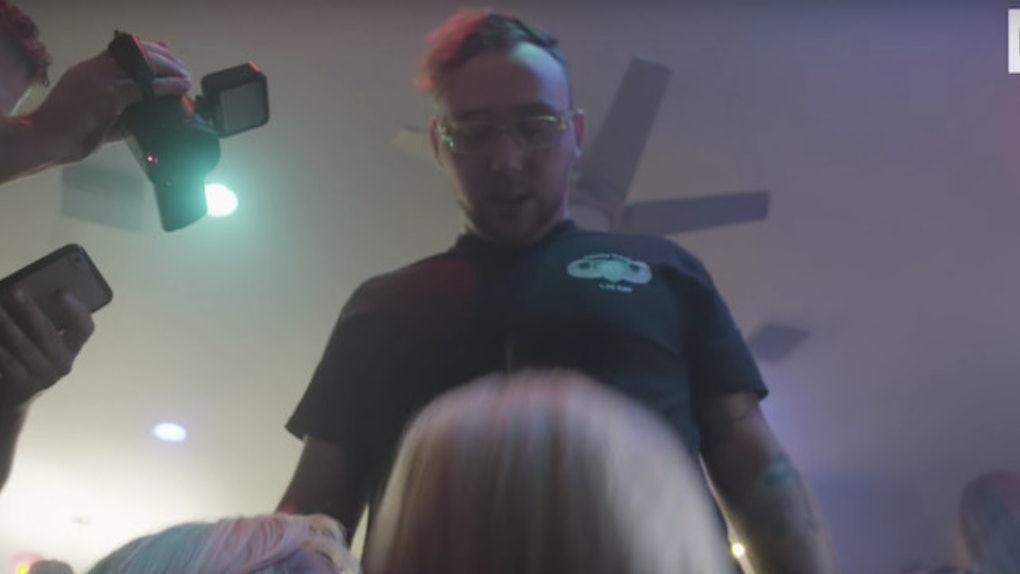 Mike Busey is the kind of guy you hate to love.

On the outside, the 35-year-old Florida resident is big, loud, covered in tattoos and curses the exact amount you'd assume someone who lives in “The Sausage Castle” would.

The day we met, he wore a military camp vest — no undershirt — and Apollo Creed's American flag boxing shorts.

To top it all off, he was drinking straight from a bottle of Disaronno on the stoop of a multi-million dollar mansion he just moved into, which he largely paid for with his earnings from a members-only X-rated Snapchat profile.

He's a storied member of the “Jackass” crew, revered as some sort of demi-God in the Juggalo community and had been previously crowned the 51st most popular man in Orlando.

He continuously bragged how every dude he meets is jealous of him because he has a small dick, yet he gets with the hottest chicks — his words, not mine.

Underneath everything going on in his life, he is someone who puts an emphasis on loyalty within the family he's built.

Granted, that family includes a 550-pound man, a stripper named Ratchet Regi, a man who goes by “Big Country" and a number of other — for lack of a better word — outcasts who all occupy the house.

They all look out for each other, and more importantly, they're all loyal to him. They value the support group they've found in The Sausage Castle and look to Mike Busey as their spiritual leader.

Think of it as the redneck Florida answer to the Playboy Mansion.

It's an event that is so elegantly simplistic in its moral ambiguity, it could easily come from a modern-day version of the Talmud.

Is it ethical to offer sexual favors to a group of guys who sacrificed their lives for the country? I still don't know the answer.

It's something I've spent the past 24 hours of my life thinking about and continue to question as I sit on this plane back to LAX after one of the most surreal experiences of my life.

What makes it even tougher to decide a stance is how Mike isn't doing this as some sort of gimmick. He is doing this because he is genuinely trying to do a nice thing for a group of forgotten heroes.

It's not news that veterans in this country are treated remarkably terribly. I could start listing suicide and depression rates, unemployment numbers and the shockingly large homeless problem vets face, but I think everyone sort of knows that.

The second they take off their uniforms, they seem to become one of the most neglected and ignored communities in this country.

Speaking to party attendees, I got the feeling that while they were actually in the army, they were respected everywhere they went and treated like minor celebrities, especially in their hometowns.

Once their time in the service ended, that all went away — kind of like how B-level athletes fall into obscurity after they retire.

The difference is that B-level athletes have money from their playing days — if they were smart — and an impressive résumé that could get them some form of employment.

A lot of vets don't have this employment infrastructure. The depression from going from such a high level of regard to being universally ignored is crippling and magnified tenfold because, at the end of the day, the military doesn't pay that much money.

Not to mention the fact that the mental and physical trauma from serving in war is often debilitating. One former soldier in attendance lost a leg to an IED and was accidentally set on fire by another member of his team (separate incidents).

I watched a different vet experience a small PTSD moment when a fog machine suddenly went off with a loud hiss. "It's loud, sudden things like that which set me off," he said.

The point is, this is a massively ignored community of real people who are hurting. They have social, financial and physical problems and can be treated like outcasts, to some extent — aka Mike Busey's wheelhouse.

Mike supports vets — as he has friends and family who have served and died during deployment — in a way that is so comically ham-fisted it borders on genius.

When I asked every vet I spoke to about what they thought of the event, they almost uniformly mentioned the sexual element third when it came to parts of the party they loved.

The first thing they would all talk about is how grateful they were someone did something for them.

In the most heartfelt way possible, they all were taken aback by the fact someone with Mike's celebrity — and don't fool yourself, Mike's following is shockingly large, with a decent chunk of his fan base overseas — was willing to throw a party just for vets.

The second thing they all would mention is the instant camaraderie of everyone in attendance.

Many guys showed up not knowing anybody yet felt at home. Everyone there had one massive thing in common, and it created a sort of emotional safety bubble.

At the end of the day, Mike Busey is a good guy. You can question his actions, but you can't deny that he's coming from a genuine place.

He also has a stripper pole in his bedroom, so honestly, who knows.