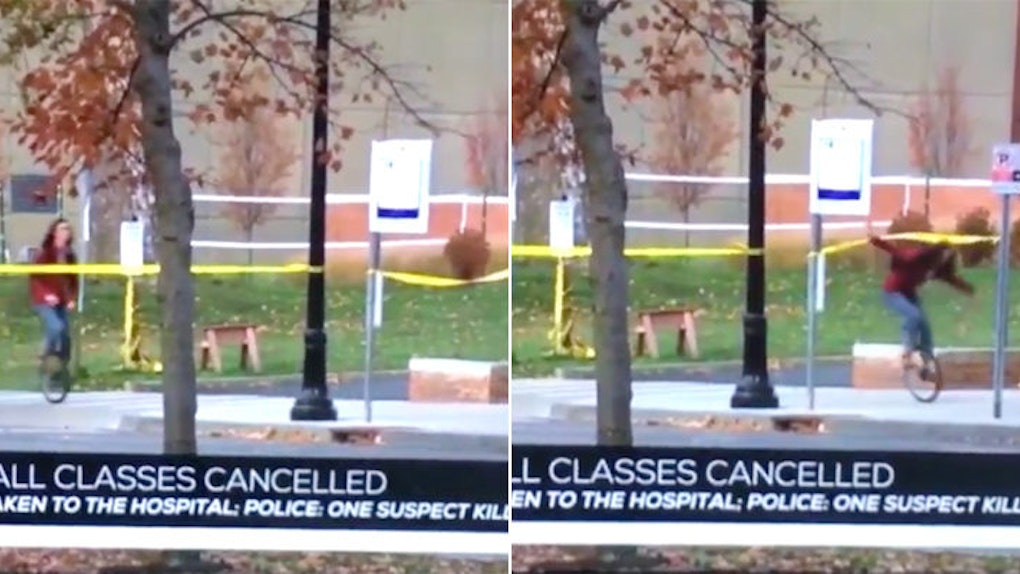 There were plenty of red flags: police tape, campus alerts, national coverage, fear of the worst.

None of the warning signs kept this guy from cycling around Ohio State University on Monday, November 28, after a campus lockdown.

While the University was urged to stay cautious, this unicycle rider carried on. A video of his oblivion, which was captured during a live broadcast of the events by WBNS-TV, was posted on Twitter and shared thousands of times.

It's an unexpectedly funny moment during an otherwise horrifying day for Ohio State.

The details, according to the Columbus Dispatch, are pretty grim.

On Monday, shortly before 10 am, student Abdul Razak Ali Artan drove a car over the curb outside Watts Hall and into a crowd of other students.

At 9:52 am, Artan then got out of the car and stabbed multiple people with a butcher's knife. By 9:53 am, an Ohio State police officer shot and killed him.

Afterward, the University issued a warning of an "active shooter" being on campus, urging students to "run, hide, fight."

By noon, the warning had been lifted and classes had been cancelled for the day.

The incident resulted in just one death: the suspect's. Eleven others were sent to the hospital, according to CNN.

While the suspect's faith and motive have been the subject of speculation after police had cleared the scene around Watts Hall, University President Dr. Michael V. Drake urged the school's community to place its thoughts elsewhere, according to CNN.

We all know when things like this happen that there's a tendency sometimes for people to put people together and create other kinds of theories. We don't know anything that would link this to any community. We certainly don't have any evidence that would say that's the case. What we want to do is really unify together and support each other; do our best to support those who were injured in their recovery, and then allow the investigation to take place.

Ultimately, Monday was a day during which the worst (a multitude of student deaths) was feared, but fortunately avoided. Still, 11 people were hospitalized, and you can't blame anyone on campus for being shaken up.

Not this guy, though.