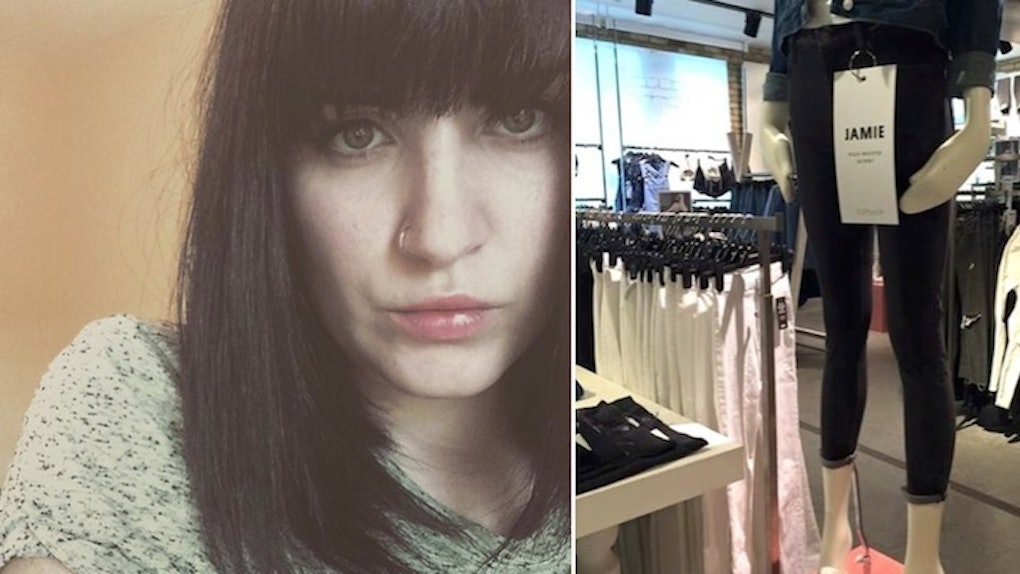 British retailer Topshop is under fire for its abnormally skinny mannequins, yet again, after a shopper in the UK posted a picture of an ultra-thin form on social media.

This time, however, the High Street chain is actually doing something about it.

A little over a week ago, Laura Kate Berry posted a photo of the skinny jean-clad mannequin to Facebook, along with a lengthy post detailing why the mannequin's shape is problematic.

I was stopped in my tracks by the mannequin in the picture I've shared with this post… I'd love to hear how you can justify the ridiculously tiny mannequin in your Bristol Cribbs Causeway store?…. So today, I'm calling you out Topshop, on your lack of concern for a generation of extremely body conscious youth. I'm old enough and wise enough to know that I will never be this size, but as we've all been impressionable teens at one point, I'm fairly certain if any of us were to witness this in our teenage years, it would have left us wondering if that was what was expected of our bodies…. Perhaps it's about time you become responsible for the impression you have on women and young girls and helped them feel good about themselves rather than impose these ridiculous standards...

Berry's post quickly went viral and grabbed the attention of people working at Topshop, who took her complaint to heart. In a thoughtfully written reply, a rep confirmed the company will no longer order that style of mannequin.

The rep explained, while the mannequin isn't supposed to be representative of a real body and is "stylized to have more impact in store," her concern was reason enough to discontinue use.

I have to commend Topshop for its actions; it speaks volumes of the values of those who work at the company and their commitment to being a positive example for other brands.

Hopefully, this is the first step toward the implementation of broader industry-wide changes -- not just for Topshop, but for all of the fashion industry.

See the full exchange as well as comments from other disgruntled shoppers below.

Topshop had a surprisingly helpful response.

It appears many shoppers felt the way Berry did.