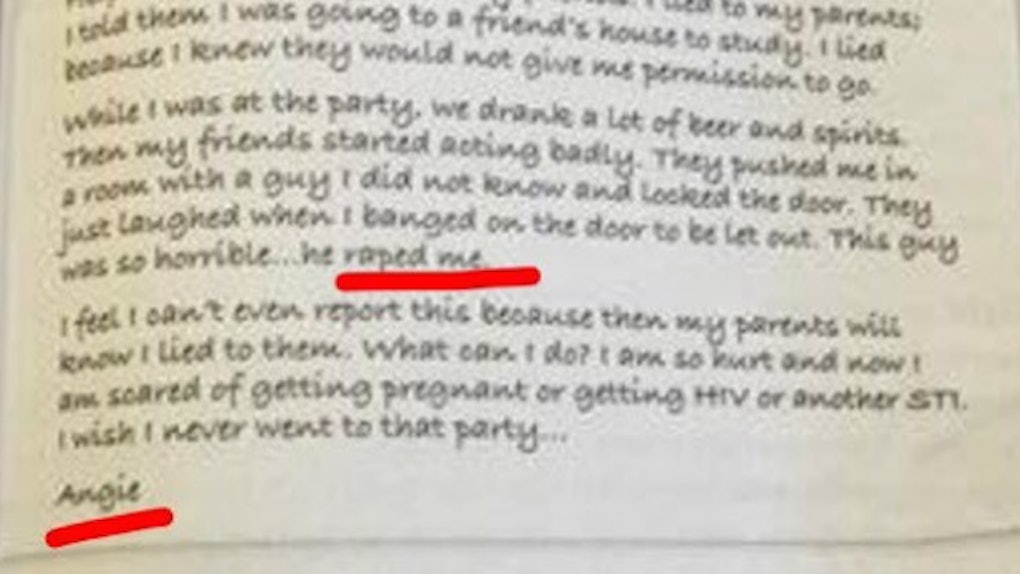 A really cool thing is happening in modern culture right now. We're slowly moving away from blaming victims of sexual assault for getting assaulted.

Survivors are blamed for wearing suggestive clothing, having sex lives, flirting, going to parties and drinking. They're told they were "asking for it" by participating in those kinds of behaviors.

When any other crime is committed on a person, we don't ask what the victim wore. When a person's wallet gets stolen, we don't tell the person he or she shouldn't have carried a wallet.

But while this move away from victim-blaming is happening, it's happening very, very slowly.

This is especially true in the classroom, where sex education and alcohol classes often fail to properly address sexual assault.

A 10th-grade textbook from South Africa clearly demonstrated just how badly young people can be taught about sexual assault.

The textbook features a scenario in which a girl, Angie, writes a letter about being raped. She says she lied to her parents to go to a party, and then drank there.

Then, people pushed her into a room with a man she did not know, and did not let her out. He raped her.

After the scenario, the textbook gives a list of prompts. One of them says,

First of all – as Angie wrote – it was not sexual intercourse: It was rape.

Second of all, it was not her behavior that led to rape. It was the behavior of her alleged "friends" and the man who did it.

This activity is teaching our kids to justify rape! How can this be allowed, in a country that already has horrifying rape statistics?

Another woman, Ashleigh Phillip, wrote to Pearson, the book publisher. She received a response.

We want to do what is right and have engaged the Department of Basic Education to work with us to ensure the content on this topic is more inclusive, contextually correct and sensitively equips our young people to deal with this scourge in our society. This process is already in place and there will be no further reprints of this edition.

At least this story ended well. The book is no longer publishing this material and – hopefully – no longer teaching impressionable young people that a woman's rape is her fault.

Now, we just need even better sex education around the world.