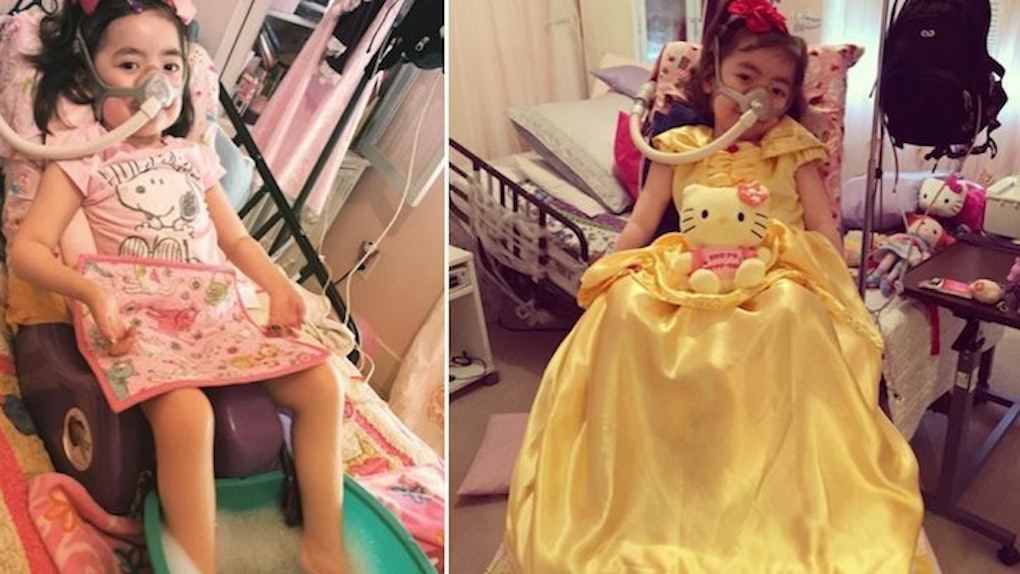 Julianna Snow is only 5 years old, but she decided she would rather go to heaven than spend another day in the hospital.

She has a rare condition called Charcot-Marie-Tooth disease. The disease caused her muscles to atrophy and the quality of her breathing to seriously decline. If Julianna comes down with something as simple as the common cold, it could develop swiftly into fatal pneumonia.

If this happens, her doctors say in the unlikely event they can save her, she will spend the rest of her life sedated on a respirator.

Realizing the grim, unavoidable fate at hand, Julianna's mother, Michelle Moon, talked to her daughter about the concept of choosing to end her life when faced with another, perhaps permanent, trip to the hospital.

Moon detailed one of her discussions with Julianna on The Mighty, a site with stories about people and families dealing with deadly illnesses and disabilities.

J: I hate NT [naso-tracheal suction, where a tube was placed down her nose into her lungs without sedation]. I hate the hospital. M: Right. So if you get sick again, you want to stay home. But you know that probably means you will go to heaven, right? J: (nods) M: And it probably means that you will go to heaven by yourself, and mommy will join you later. J: But I won't be alone. M: That's right. You will not be alone. J: Do some people go to heaven soon? M: Yes. We just don't know when we go to heaven. Sometimes babies go to heaven. Sometimes really old people go to heaven. J: Will Alex [her 6-year-old brother] go to heaven with me? M: Probably not. Sometimes people go to heaven together at the same time, but most of the time, they go alone. Does that scare you? J: No, heaven is good. But I don't like dying. M: I know. That's the hard part. We don't have to be afraid of dying because we believe we go to heaven. But it's sad because I will miss you so much. J: Don't worry, I won't be alone. M: I know. I love you. J: Madly. M: Yes, I love you madly. I'm so lucky. J: And I'm so lucky. M: Why? J: Because you love me madly.

Michelle and her husband, Steve Snow, originally knew they would take their 5-year-old to the hospital if she contracted an infection, but after speaking with Julianna, Michelle and Steve told CNN they “let go of that plan because it was selfish.”

When commentators on The Mighty expressed mixed feelings over Michelle and Steve allowing Julianna to choose for herself, Michelle wrote a follow-up post detailing their position.

[Julianna's] scared of dying, but has, to me, demonstrated adequate knowledge of what death is… She hasn't changed her mind about going back to the hospital, and she knows that this means she'll go to heaven by herself. If she gets sick, we'll ask her again, and we'll honor her wishes… I made sure she understood that going to heaven meant dying and leaving this Earth. And I told her that it also meant leaving her family for a while, but we would join her later.

Beyond commentators, bioethicists weighed in with varying replies to the Moon-Snow family's situation.

The first, Art Caplan, believes Julianna is too young to make such a decision that is, quite literally, life or death.

This doesn't sit well with me. It makes me nervous… I think a 4-year-old might be capable of deciding what music to hear or what picture book they might want to read. But I think there's zero chance a 4-year-old can understand the concept of death. That kind of thinking doesn't really develop until around age [nine] or 10.

Caplan added there is a chance Julianna could see the pain her parents felt watching her health deteriorate and is attempting to please them, as children often do.

Dr. Chris Feudtner, a former colleague of Caplan's, approached the issue from a much different perspective.

To say her experience is irrelevant doesn't make any sense. She knows more than anyone what it's like to be not a theoretical girl with a progressive neuromuscular disorder, but to be Julianna… Palliative care isn't about giving up. It's about choosing how you want to live before you die. This little girl has chosen how she wants to live.

Doctors working closely with Julianna on a regular basis agree she made the right move.

Her pulmonologist, Dr. Danny Hsia, has faith Julianna, despite her age, knows what is best.

It makes a lot of sense to listen to her… For her, there is no light at the end of the tunnel… She doesn't have a long time to live.

Since it has been a year since Julianna's last infection, her family is enjoying their time with her while they can.

All the while, her parents are preparing themselves and Julianna's 6-year-old brother, Alex, for the eventual reality of living without her.

Citations: Heaven over hospital: Parents honor dying child's request (CNN), My Daughter Wants to Choose Heaven Over the Hospital Read more: http://themighty.com/2015/05/my-daughter-wants-to-choose-heaven-over-the-hospital/#ixzz3pyDPSINB (The Mighty), How Our Daughter Helps Us Face Our Greatest Fear (The Mighty)