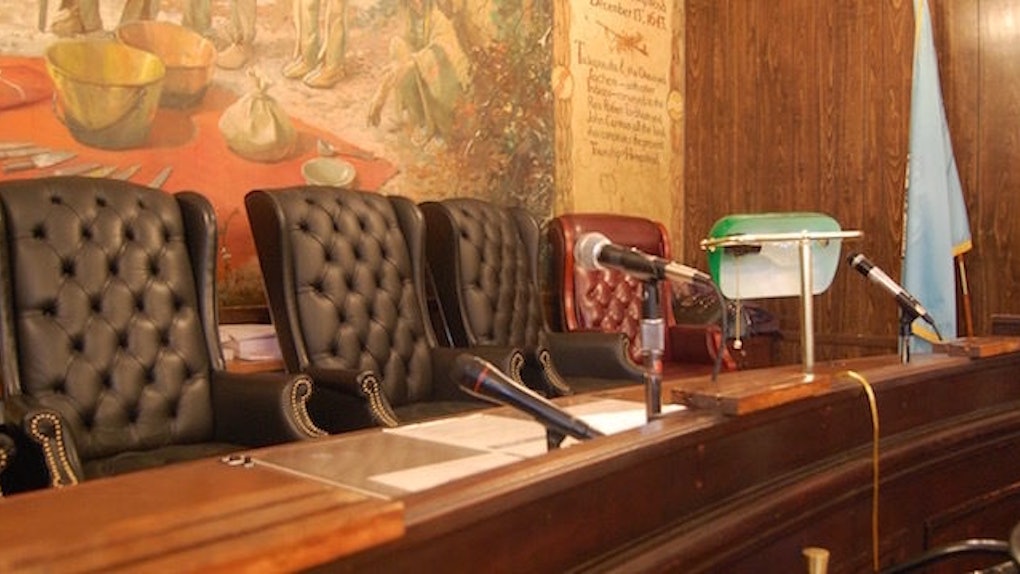 Kate* had been bullying Jane on Instagram for months.

They used to be best friends. But then their other friend and her boyfriend had a breakup, and Kate thought Jane was getting too cozy with the friend's ex.

Kate changed the captions on old Instagram pictures of Jane. She started harassing her on a finsta (fake Instagram).

Jane, 17, did her best to ignore it as the school year started. But then Kate and Jane went to the same Halloween party, hosted by a local organization.

Kate got out her phone and started recording as she shouted taunts at Jane.

Jane couldn't take it anymore. She punched Kate in the face.

And that's how Jane ended up in Nassau County's Youth Court.

Youth Court was started six years ago by the District Attorney's office and has seen nearly 700 cases.

We recognized that we had to do more for young offenders.

When a young person commits a crime -- except for those that are violent felonies or assaults, sex offenses or gang-related -- they have the option of diverting to Youth Court.

The court is run completely by teenagers.

They take real cases from both the district and family court with real teenage offenders.

Volunteers from local high schools function as the lawyers, or "advocates," for both the accused and the community.

Teenagers act as clerk and bailiff, issuing oaths and keeping the court moving.

The jury is made up of young people who have had their own cases already go through Youth Court.

They decide the sentencing for their peers, which always includes community service and cycles as jury in the Youth Court.

Sometimes they get more creative with sentencing, like making the offenders write letters of apology or making a PowerPoint for their school administrators about bullying.

They all become very righteous as they're sitting there, and they take the job very seriously. If they think someone else is lying up there, they will not have it. They will automatically give them the highest sanction -- despite how they performed in their own case.

After school on Thursday, Jane joins her advocate in youth court.

Her dad sits in the courtroom audience.

Reyer first asks if anyone participating in the case recognizes each other. If a juror knows someone, they are dismissed.

The defense and community advocate -- both teenagers -- give their opening statements.

Ian, 18, went through Youth Court with his own case, but still comes back to participate, as a handful of former offenders do.

I got arrested, I went to the court and they gave me some opportunity to wipe away my wrongdoings and actually get me interested in the whole concept of the jury and the clerk.

He has served a bunch of roles in the court, but today he's on the defense advocate team for the case coming up after Jane's case.

When I go talk to [the defendants] and stuff, I'm completely calm, but they're freaking out. They don't know what's happening, usually they have a parent that's like, 'oh my God!' I just try to be calm with them.

Ian said he tells his "clients" that he's been through the system and calms them by explaining it. But he doesn't tell them everything's chill. He said,

This is your safety net. You got in trouble, you went through this, you only have this once. You can't come back here after that. After this, they've got to change. This has got to be their changing point.

Youth Court was "absolutely" a changing point for Ian, thanks to Nassau County's pro-social activity part of the program.

Through the pro-social activity, the D.A. learns what an offender is interested in and links them up with a professional in that industry. This can be a coach, businessperson, college professor and so on.

Ian thought he wanted to be an insurance salesman -- just because it was what his aunt did.

But through the program, he's realized he "had no clue" what that meant. He participates in a police explorers program and is nurturing a newfound interest in law and law enforcement.

After the opening statements are read, Jane faces questions from the advocates and jurors.

The questions are really geared at the consequence of their actions and why they made the decision that they made that day. So it's more about the 'why' then actually the 'what' happened.

At one point, Reyer advises Jane to answer questions with "yes" instead of "yeah."

Katarina, 17, is representing the community in the case against Jane. She asks Jane what she could have done differently and why she escalated the tension to a physical blow.

Katarina came to the program after freshman year, when she asked her guidance counselor for options of extracurriculars.

She mostly serves as the community advocate. Although she likes being a defense advocate because you get to know the offender and understand their perspective, she enjoys representing the community's perspective. She said,

I like being able to be the person that gives them the other point of view of what they did. Like, 'what you did is wrong, and this is why we see it as a wrong thing.'

But Jane's case is "a little bit different" for Katarina.

Normally she's "a little bit more aggressive" in her statements and questions, but Jane's case is too relatable. She said,

I could see myself, after months of bullying, I could finally get to that point of just, you know, losing control of all the things that my parents have taught me.

So Katarina chose to use more discretion and requested a slightly lower sentencing than she typically would for this offense. She recommended the jury give Jane 25 hours of community service and four jury duty appearances.

Every juror is required to ask the offender at least one question during the cases.

They ask Jane to clarify some points in the timeline of the case. They ask how she reacted when she was arrested.

They ask if there was alcohol at the Halloween party, or if she thought Kate had been drinking before the party.

Nick went through Youth Court after an argument with his mother. He already served his jury duty sentence, but he chooses to come back.

I liked the feel of it. It was good to give back. I liked the surroundings, and I want to be a lawyer -- that's one of my goals and passions.

He was a bit wary of the jury of his peers in his own case. He said,

But now, having served on the jury, Nick sees it slightly more generously.

A lot of the kids get caught for the same things, so they often are able to connect with each other because a lot of them have the same reasons, stuff like that.

The advocates make closing statements, noting Jane's character, good schoolwork and plans for the future, and the jury leaves to deliberate.

In addition to the law, Nick's interested in psychology, so he's fascinated by how the jurors react to cases. He said,

They might be like 'Oh, they don't feel bad about it, they'd probably do it again, so give them the max to lessen the chances.'

The jury considers how the offender presented her or himself, including if the defendant expressed legitimate remorse and learning.

To have a case in Youth Court in the first place, Reyer said,

The young person has to acknowledge that they did something wrong or take responsibility for their actions and they have to volunteer to be part of the program.

The hope is this will be a learning experience and the first and only interaction a person has with law enforcement.

We found ultimately it was worth our investment of time and resources and energy.

96 percent of respondents have completed the program successfully. The rate of recidivism (committing another crime) is under 10 percent.

Offenders have docked over 10,000 hours of community service.

If the court finds a crime was committed because of a drug problem, the D.A. gets them help. They assign mandatory alcohol programs to cases related to it.

Offenders are interviewed six months out to see how they're doing. Many participants have used the experience as the focus of their college essays -- and alumni often come back to visit while on college breaks.

After about 15 minutes of deliberation, the jury comes back with their sentencing for Jane.

Jane and her father sign papers to confirm the sentencing at the front of the courtroom.

Katarina said that her favorite part of Youth Court is when she gets to talk to the offenders after serving as community advocate.

She introduces herself and apologizes if she hurt their feelings with her questioning. She said sometimes offenders will tell her,

Jane leaves the courtroom after explaining her actions out loud to a full room. The next time she gets set off by someone, she'll absolutely remember her experience in Youth Court.

She'll be back to serve her jury duty, but if all goes as hoped, she won't face a jury herself again.

*Names of minors have been changed.