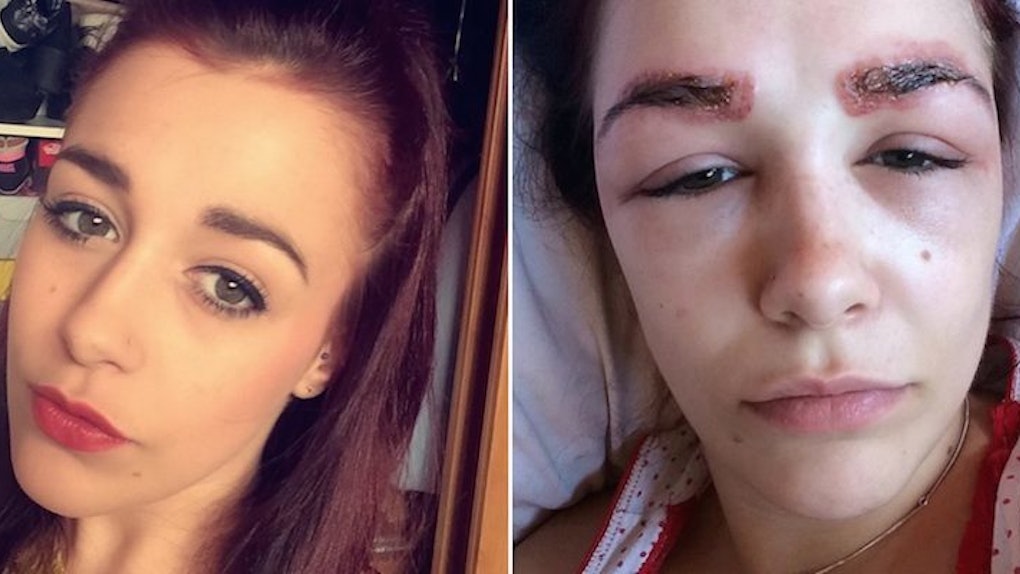 Teen's Eyebrows Are Not 'On Fleek' After Beauty Treatment Goes Wrong

An English teen is making national headlines after a botched cosmetic procedure left her swollen and scarred — and now, she's telling her story in the hopes of deterring others from making the same mistake.

Polly Smith, 19, visited a local salon in her hometown of High Wycombe, Buckinghamshire for a procedure known as HD Brows.

Designed to darken and thicken sparse brows, the treatment involves waxing, threading and dyeing the eyebrows to achieve a desired look.

As is customary, Smith tested the dye on her skin prior to the procedure to ensure she wouldn't have an allergic reaction.

The skin test yielded no reaction so Smith assumed the treatment would go off without a hitch.

Unfortunately, that wasn't the case. Shortly after the procedure she began to notice irritation, and days later, Smith was horrified to find an allergic reaction caused her face to swell and bruise so badly she could barely open her eyes.

The skin around her eyebrows turned red and scabby due to an infection, she says.

A friend brought her to the hospital where doctors prescribed her a plethora of antibiotics, steroids and antihistamines to treat the infection.

This is Polly before the treatment...

Smith told Daily Mail, “[The doctors] said they had never seen anything like it."

Now, the 19-year-old is using her story to warn others of the dangers of seemingly harmless cosmetic procedures.

She warns, “You should think twice about doing something which could scar your face... I don't think it is worth the risk.”

Citations: Teenager left with scabby face and one eye swollen shut after having severe allergic reaction to beauty treatment to get thicker eyebrows (Daily Mail), This Teen Tried To Get Model Worthy Eyebrows But Ended Up With A Nightmare On Her Face (BuzzFeed)