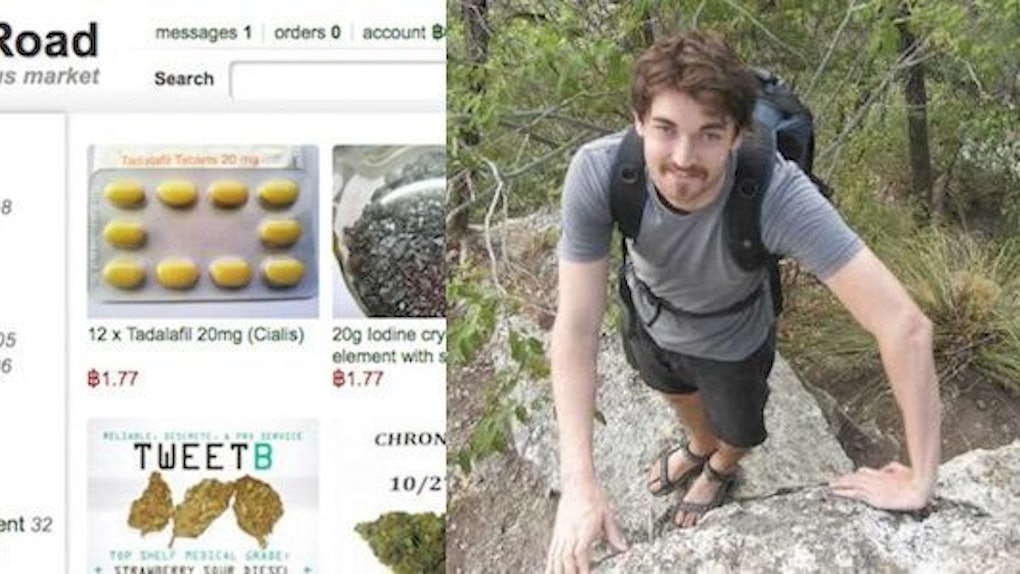 Silk Road, The Pirate Bay And The Future Of Online Illicit Marketplaces

The advent of online shopping changed a large percentage of the population’s lives.

Trips to places like the mall or drug store took a back seat to the virtual marketplace.

For many, these outings became a relic of the past. For the first time, people were capable of ordering products online, ranging from speakers to sneakers and from steaks to sunglasses.

Furthermore, the creation of eBay allowed the individual to participate in the process.

Provided one had an Internet connection, he or she could sell anything to just about anyone.

I fell in love with this process. Ordering and selling products with ease was only a piece of the attraction.

It felt like the holiday season had been extended to 365 days per year.

Coming home to find a few packages on my doorstep always led to a tiny release of dopamine.

Anticipation would mount with each step as I neared the landing, and the view when I hit that last step would reveal whether my purchases had arrived via post.

Even though I knew what was inside the small brown boxes, it always seemed like Santa had dropped off a few new gifts for me.

Over time, this chain of events formed a bit of a habit. Online shopping became less and less about procuring the things I needed, and it became more and more about the little release I received when they arrived.

It was a small form of addiction, nothing unmanageable, but it definitely tickled the same nerve that substance abuse was beginning to ignite.

Fast-forward several years: That same nerve, or group of neurons, had been firing steadily for close to a decade.

I had become a full-blown addict and alcoholic, a user of hard drugs and a drinker of plastic bottle vodka.

The idea of online shopping was a distant memory, something I rarely participated in anymore. I now frequented the shops I once had considered an inconvenience.

No longer an avid consumer within the digital world, one might say I had gone analog.

Then I met Mike, and the passion was reignited. He told me about Silk Road, the illicit marketplace where people could purchase just about anything over the net.

I didn’t believe him at first. “For sure, the government would squash such a business,” I thought. I had to see it with my own eyes to believe it.

For someone who considers himself somewhat tech-savvy, I was slightly taken aback with the difficulty required to become a member of this shady world, of the dark net.

Armed with only my MacBook and the words “Silk Road,” I embarked on an intense journey of investigation.

If able to order the noxious substances I desperately desired without leaving my home, I definitely wanted to give it a try.

It would allow me to avoid the seedy areas of town and the dangerous people I was involved with. It felt like a safer route to explore the unsafe.

It all started with Google, like every other time I had clicked on the compass icon that shortcuts the way to Safari.

Several hours and Google searches later, I had a loose understanding of how the system worked.

It boiled down to a few simple things: a new web browser (called a Tor Browser), a digital currency called Bitcoins and a form of email encryption known as PGP.

With these basic tools, I was able to become a customer for black market products over the Internet.

A cursory overview is necessary to better understand the process, although I will avoid specific details because this post isn’t intended to be a “how-to.”

Hopefully, by understanding the methods involved, you will have a better idea why law enforcement has had difficulty keeping these marketplaces shut down.

The key to avoiding legal ramifications for illicit activity on the Internet is anonymity.

The three aforementioned things are all clever ways to cover up someone’s tracks and to leave no digital signature (or at least one that is very difficult to follow).

The first one, the Tor browser, is a simple program that enables a user to surf the Internet privately.

It is available to download free of charge. Ironically, the US Navy initially developed the browser for use.

Basically, the Tor network disguises a user’s identity by moving his or her traffic across different Tor servers and encrypting the traffic so it isn't traceable back to the user.

Anyone who tries to track movement would see traffic coming from random nodes on the Tor network rather than the person’s computer.

Because the Tor browsing bounces and encrypts information off of so many servers, it is much slower than a typical web browser.

However, the end result is that someone is capable of surfing the Internet without leaving a footprint in the form his or her IP address.

The next form of anonymity is monetary. Bitcoins do offer the user an added level of security because personal information doesn’t have to be attached to the monetary value (which is represented through chains of numbers), but it is far from totally anonymous.

It is possible to trace transactions with Bitcoins through where they are being received. In other words, Bitcoin is pseudonymous.

Sending and receiving bitcoins is like writing under a pseudonym.

If an author’s pseudonym is ever linked to his or her identity, everything he or she ever wrote under that pseudonym would become linked to them.

In Bitcoin, your pseudonym is the address to whichyou receive Bitcoin. Every transaction involving that address is stored forever in the blockchain.

The final level of security is PGP. This is an acronym for Pretty Good Privacy.

It is a simple way of encrypting emails so people can communicate with each other without someone intercepting the data and being able to decipher it. It is done through a system of keys.

Each user has an encryption key that is publicly known and a private key that is known only to that user.

A user encrypts a message he or she sent to someone else by using that person’s public key. When they receive it, they decrypt it using their private key.

It should be noted that none of these tools were created with any malicious intent. They all have several unique and legal applications.

However, they are capable of being used for criminal purposes. By shielding identity, communication and financial transactions, people are capable of trading illegal goods through the mail.

Most package services have such a large volume of mail that it is nearly impossible to effectively screen through everything.

Furthermore, when illicit goods are shipped, many purveyors send them in discrete ways.

With that brief overview of the process, we can now pontificate on the future of this world.

The reality of the online black market is that as technology progresses, new ways of shielding one’s identity will emerge, forever creating new illicit marketplaces and a cat-and-mouse dynamic between law enforcement and the criminal underworld.

To get an idea of this future cat-and-mouse dynamic, let's take a look at the history of dark web illicit sales post Silk Road.

On Oct. 2, 2013, Ross William Ulbricht was arrested outside the San Francisco public library.

As the alleged creator and moderator of Silk Road, he was indicted on charges of money laundering, computer hacking, conspiracy to traffic narcotics and placing murder contracts on six men who were attempting to blackmail him.

The FBI immediately seized $4 million worth of Bitcoins from his computer and another $28 million later that month. Ulbricht’s trial started in the beginning of this year, and on May 29, he was sentenced to life in prison.

What is important to note here is that Ulbricht, who operated under the Silk Road identity “Dread Pirate Roberts,” didn’t get caught because of fancy Internet maneuvering by the FBI.

The FBI’s technological team didn’t infiltrate the website Ulbricht created or crack the many structures that he used to keep him and his user’s identities secret.

They caught him because he made a mistake by posting his email address on a public forum that was not encrypted and discussed the site.

With that tiny shred of information, they were capable of reverse engineering his identity through other nameless information they had, information that was useless up until they had his email address to link it to.

In other words, Ulbricht’s identity may have remained secret if he had only adhered better to his own standards.

The folly behind Ulbricht’s actions and his eventual arrest leads us to the question of whether or not the FBI really had a momentous victory with the closure of Silk Road.

History shows they did not, that they plugged a leaky hole on a dam only to have another leak pour forth.

One month after Silk Road’s closure, Silk Road 2.0 launched, offering the same array of illicit substances as the original site.

Not only did the reloaded site match the previous one in sales, there was an increase in the number of dark sites offering similar services.

Christopher Ingram notes in his Nov. 2014 piece for the Washington Post,

“The FBI may have hoped that shutting down Silk Road would take a bite out of illicit drug sales online. But if anything, it appears the opposite has happened. In the past year, dozens of similar sites — so-called 'darknet' markets — have sprung up in Silk Road's place. Just before it was shut down, Silk Road, along with three similar sites, had about 18,000 drug items listed for sale — everything from marijuana to ecstasy to heroin. By April 2014 — six months later — there were 10 darknet markets listing 32,000 drug items for sale. By August of this year there were 18 darknet marketplaces with 47,000 drug listings, according to data compiled by the Digital Citizens Alliance.”

On Nov. 6, 2014, about a year after its creation, Silk Road 2.0 was shut down and Blake Benthall, the man behind the resurrected site, was arrested.

Hours later, Silk Road 3.0 launched. The history gets increasingly elaborate, and it includes numerous offshoots that use a similar formula as the original Silk Road.

As the number of seized and created sites continues, one might surmise that it could continue ad infinitum.

The authorities have improved at cracking down dark web sites through better capability of monitoring previously untraceable activities on the digital front, but with each step they make, there appears to be a backlash of ingenious computer programming that repositions them as the underling.

A similar dynamic exists with the extremely popular torrenting website, The Pirate Bay.

This site holds massive quantities of “free” media that one would have to pay for otherwise, ranging from music to movies and from audiobooks to applications.

The site was shut down years ago, and the administrators were arrested. Yet, a Google search will quickly reveal that the site is still in operation.

Authorities haven’t been able to keep the site offline, much like they have struggled with Silk Road and its offshoots.

The future of Internet regulation remains ambiguous at this point.

The road is already long and curvy, with twists and turns that signify respective wins and losses for the black market supporters and the authorities who pursue them.

Currently, no end is in sight.

The future of technology could ultimately determine who wins, but at present, any genius with a personal computer, spare time and a desire to dabble in the criminal underworld can create a structure that could undermine our legal system.