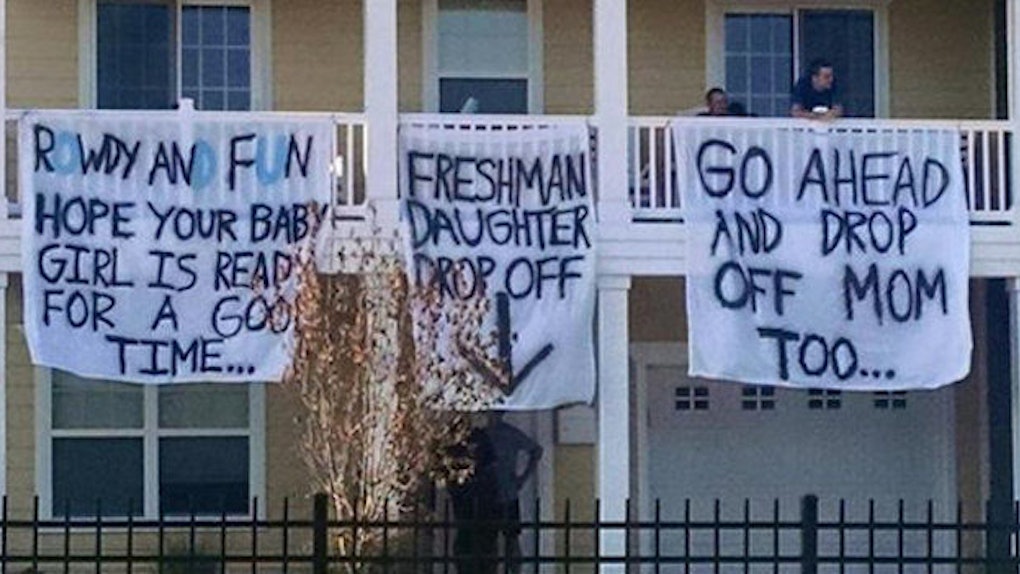 Students Cause Outrage With Idiotic 'Freshman Daughter Drop Off' Banners

As parents drove their college freshmen to Old Dominion University's campus in Norfolk, Virginia, they were reportedly met by three massive signs hanging from an off-campus residence.

The signs read, “Freshman Daughter Drop Off,” with an arrow pointing to the front door, “Rowdy And Fun Hope Your Baby Girl Is Ready For A Good Time…” and “Go Ahead And Drop Off Mom Too...”

According to school officials, the students responsible took down the banners after the university reached out to them, but at that point, a photo of the banners already made its way to social media by someone who posted it to Facebook.

In a statement denouncing the banners to the Huffington Post, ODU reps claimed,

Messages like the ones displayed yesterday by a few students on the balcony of their private residence are not and will not be tolerated. The moment University staff became aware of these banners, they worked to have them removed. At ODU, we foster a community of respect and dignity and these messages sickened us. They are not representative of our 3,000 faculty and staff, 25,000 students and our 130,000 alumni.

Old Dominion University also posted two videos to social media to redeclare its sexual assault policy and combat the perception of the university as one that condones sexual violence and perpetuates rape culture.

A message from the Student Government:"An incident occurred this weekend that does not reflect the University's... Posted by Old Dominion University on Saturday, August 22, 2015

A message from Vice President of Student Engagement and Enrollment Services Ellen Neufeldt: "Messages like the ones... Posted by Old Dominion University on Saturday, August 22, 2015

On Saturday, a message from ODU's Student Government Association stated,

Not only do these actions taken by a few individuals undermine the countless efforts at Old Dominion University to prevent sexual assault, they are also unwelcoming, offensive, and unacceptable.

The individual who originally uploaded photos of the banners to social media with the caption, “Gotta love odu,” reportedly since changed his or her Facebook display name and removed the pictures from the page.