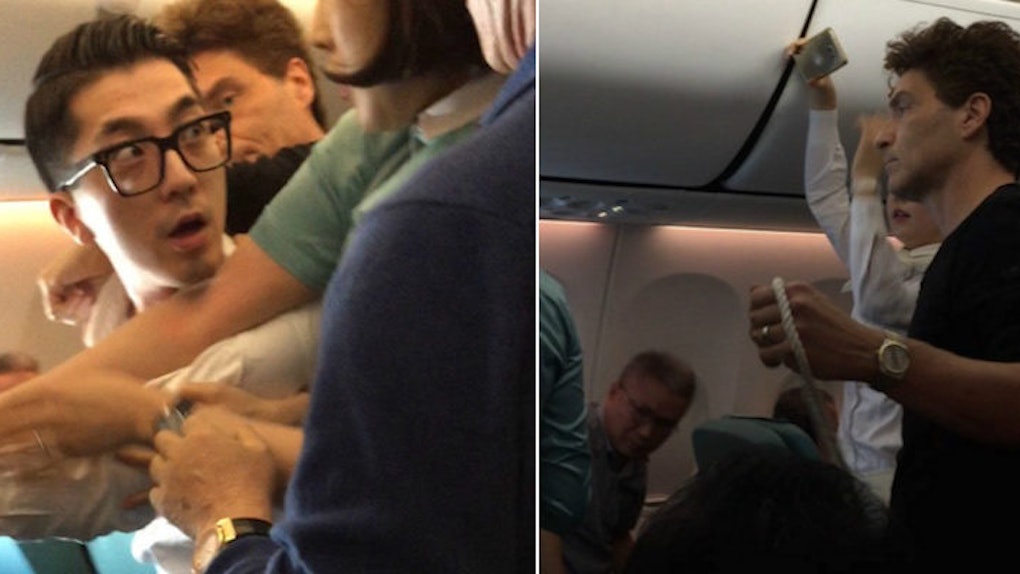 For all the youngsters who don't know who Richard Marx is, I'll fill you in: He's a goddamn triple threat.

Richard Marx is an '80s heartthrob, a highly acclaimed musician and an expert in airline security.

It's true. The 53-year-old "Right Here Waiting" singer proved himself to be a hero on a Korean Air plane on Tuesday, December 20, even though he begs to differ.

On the plane flying from Hanoi, Vietnam, to Seoul, South Korea, Marx stepped up when passenger became unruly and began attacking others aboard the chaos-ridden flight.

Apparently, the crew members didn't know how to contain the crazed passenger, so the well-known musician had to help them control him.

MARX TO THE RESCUE, BABY.

In a series of photos posted to his Twitter page, the pop star is seen assisting the airline crew after the passenger went haywire.

His wife, Daisy Fuentes, documented the entire debacle and wrote about the four-hour excursion in an Instagram post.

Underneath the collaged photos of her hubby coming to the rescue mid-air, she wrote,

On our flight from Hanoi to Seoul a guy sitting in the next row from us got crazy & started attacking the flight attendants & passengers. When he started pushing the female staff and pulling them by the hair @therichardmarx was the first to help subdue him.

This went on for FOUR hrs. I feel horrible for the abuse the staff had to endure but no one was prepared for this. They never fully got control of him.

In an authoritative tweet, Marx commented on the ill-equipped flight staff and warned that we'd be hearing about his flight on Korean Air.

According to Metro, the Korean Air spokesperson, Nathan Cho, wrote to NBC News in a statement about the conflict, and assured flyers that "the unruly passenger was turned over to the police after arrival at Incheon Airport."

In case you were worried about the well being of Marx and his wife, rest assured they're doing fine.

He tweeted last night and said he and Daisy were "home safe." As humble as ever, he claimed he's no hero... but we still think he's a star.

If you're feeling uneasy after all this plane drama, take a listen to a Richard Marx's hit that'll surely calm your nerves.