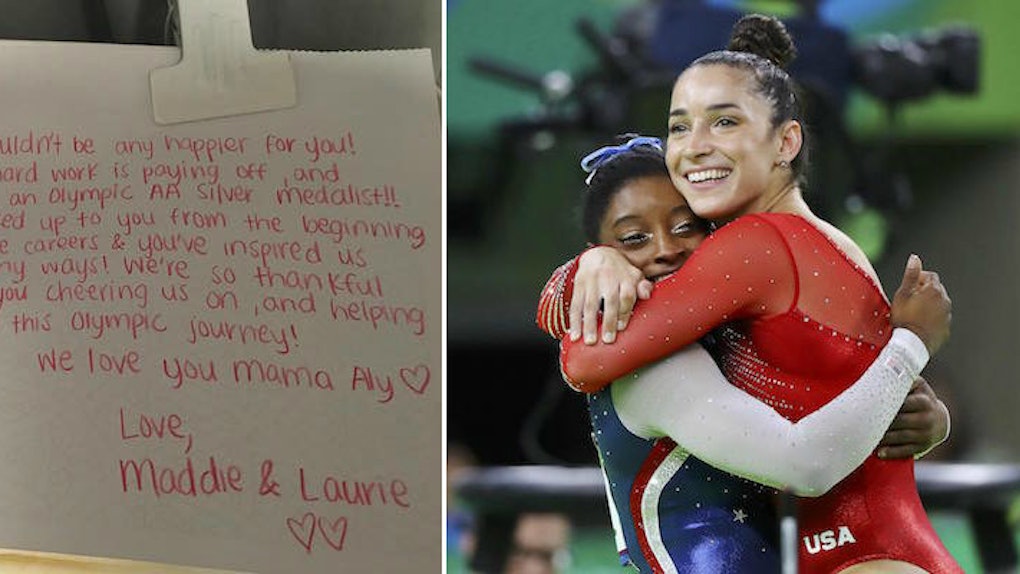 Gymnast Aly Raisman took home a silver medal for the women's individual all-around gymnastics competition in the 2016 Rio Olympics, but with the kind the support she gets from her USA teammates, it wouldn't have mattered if she won nothing at all.

According to Cosmopolitan, Raisman's fellow US gymnasts wrote a super sweet note congratulating her for taking silver and thanking her for inspiring them to compete at such a high level.

The captain of Team USA women's gymnastics took a photo of the note and uploaded it to Instagram. According to the caption, she found the note on her bed when she returned to her room.

The note, which seemed to be signed by Team USA gymnasts Madison Kocian and Laurie Hernandez, said,

Aly, We couldn't be any happier for you! All your hard work is paying off and now you're an Olympic AA silver medalist!! We've looked up to you from the beginning of our elite careers & you've inspired us in so many ways! We're so thankful to have you cheering us on, and helping us through this Olympic journey! We love you Mama Aly. Love, Maddie & Laurie

What a kind and thoughtful letter! If that was the only thing Raisman's teammates had to say to her, it would've been kind enough, but it wasn't.

Simone Biles, who beat out Raisman for the gold medal in the women's individual all-around competition, also had incrediblly kind words for her teammate.

In a photo on Instagram, Raisman typed out a widely reported quote from Biles about her, and the quote couldn't be more genuine and supportive.

I think I was more proud of Aly getting silver than me gold. She's worked so incredibly hard during her comeback. She's one of my role models, and I don't think there's anyone I'd rather share the podium with. I'm more happy for her than I am myself.

You're so sweet. Wow. We're so lucky to have such a special and rare friendship. Wouldn't want to share this with anyone else either.

With team support like this, it's no wonder Biles and Raisman led Team USA to all-around individual gold and silver medals.