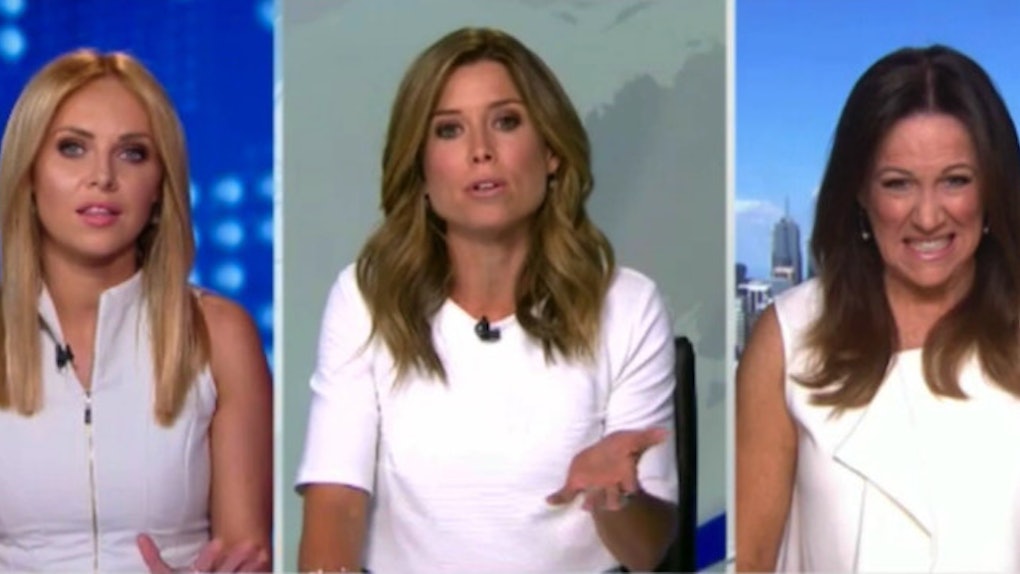 Whether you're at the bar after a long week or you're standing in line at Starbucks, there are very few things more annoying than when you spot someone wearing an outfit way too similar to yours.

Luckily, in those instances, you can move far enough away from the person stealing your swag so it won't really matter.

But what are you to do when you're prepping for a live television segment and notice two other people wearing outfits almost identical to yours?!

That's exactly what happened when reporter Amber Sherlock of Australia's Channel 9 News noticed her colleague and an interviewee were wearing outfits very similar to hers.

Rather than allowing Australia to witness three women wearing similar outfits, Amber Sherlock decided to make her co-worker change her appearance, and the entire ordeal was recorded.

Eventually, Julie Snook was able to locate a black jacket that she wore over her white shirt when the segment began. To top it all off, it turns out Snook's shirt was actually a light shade of blue, not white.

It sure looks like Sherlock still won that battle, though. Of course, the internet couldn't get enough of the dramatic dispute caught on camera.

Live TV can be a pretty stressful beast, at times. And as anyone knows, it's never much fun rocking up to work or to a party in the same outfit as one of your colleagues or friends. I probably overreacted with the pressure of presenting a live news bulletin.

"Probably?!" You definitely did, Amber.

But it's all good. Most people can relate to the fact there aren't many things worse than someone unintentionally stealing your shine on live TV.

Check out the hilarious video above!