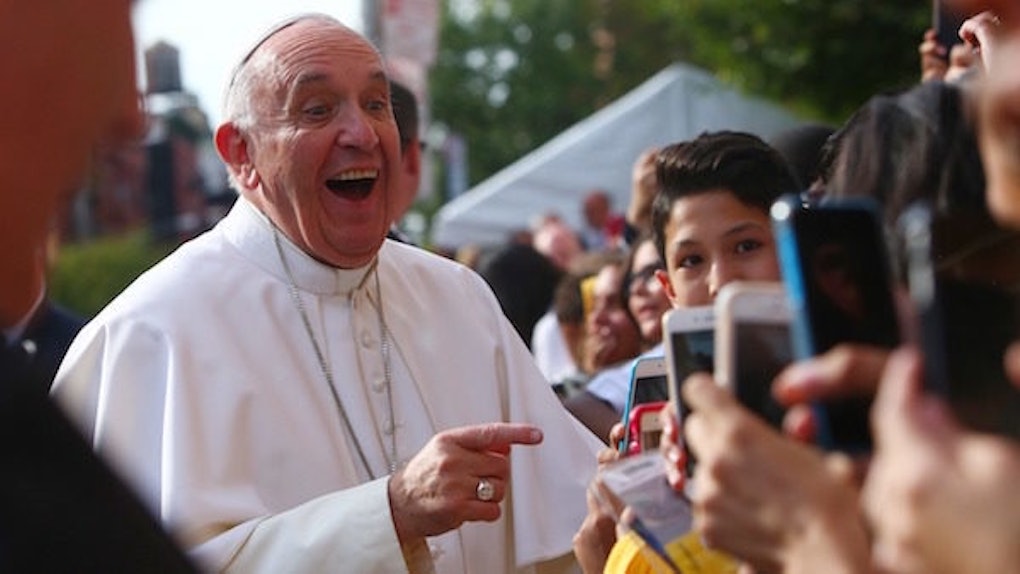 The Digital Street Team had been preparing for his visit weeks before his arrival. Our Video Team didn't commit to this video until the morning he arrived in DC.

Sure, we liked the story of these social media-savvy Millennials using the pope's visit to demonstrate how #GoodIsWinning. But we found ourselves dwelling on the reasons not to get involved. It was a last-minute decision and we were short on manpower. Access would be a pain. Navigating the pope's itinerary would be a nightmare.

It also didn't help I'm not at all religious and don't always mesh with the personalities these sorts of events tend to attract.

One thing that kept us from saying “no” was this cheesy, inexcusable feeling this was once-in-a-lifetime opportunity.*

That night, we found ourselves in DC sitting with a dozen Digital Street Team members as they finalized their plan of attack. Sure enough, one was a priest, making him the first priest I've ever met below the age of 60. A Millennial priest.

He corrected me: At 34, he technically fell outside the Millennial threshold but joked no one had to know that little detail. And it really did feel like a little detail as we watched him tweet bytes about the pope to his almost 33,000 followers (about 32,900 more than myself).

We wouldn't get an on-camera interview with the priest until the following Sunday. For the five days between, we followed the rest of the Digital Street Team along the pope's itinerary. This usually entailed hours of lines, elbowing through thousands of people, an obstructed glimpse of the pope and withstanding the mass exodus to conduct an interview.

We prepared a script of questions, but by the third day, after we met the first baggy-eyed person who slept on the sidewalk for the event, there was another question to ask the team: Was it worth it?

Their answers were the same: an emphatic “yes.”

Shocking, a Christian excited to see the pope.

But the thing is, if you asked Kevin or myself, two non-religious people, if it was it worth it to spend five, 18-hour days lugging equipment through three cities to see the pope for 15 seconds, we'd have offered an equally emphatic “yes.”

It's hard to pinpoint why. Maybe it was the importance of the situation. Maybe it felt like the payoff to that once-in-a-lifetime opportunity. Maybe we just got caught up in all the excitement. After all, people respond to passion.

I think it has something to do with Pope Francis himself. When researching the pope, what jumped out to me was how he concluded each of his speeches by asking people to pray for him. It's a simple statement and a request, but it's also an acknowledgment he's just a human being who needs help just like anyone else.

Once we finally interviewed the Millennial priest about #GoodIsWinning, I asked him point-blank,

Do you think good is winning?

I half expected a cookie-cutter response, but he thought about it and said,

We know in our faith that good ultimately wins in the end.

Not one Digital Street Team Member was deluded into thinking there's no bad in the world. Nor were they robotic, blind followers. They were individuals who valued small, good things in the world that aren't newsworthy. Sure, many were promoting religion, but mostly they were promoting good values in a way that was both void of sanctimony and grounded in reality.

This approachability has been championed by Pope Francis, who supports the inclusion of people of all faiths, non-believers and people who have sinned. It's an attitude that seems more intent on winning listeners than converts.

For myself, though five days can't erase years of cynicism, I found I was willing to listen because, well, not even the preacher was too preachy.

*There were also rumors we might get five minutes with the pope. Spoiler: We didn't.