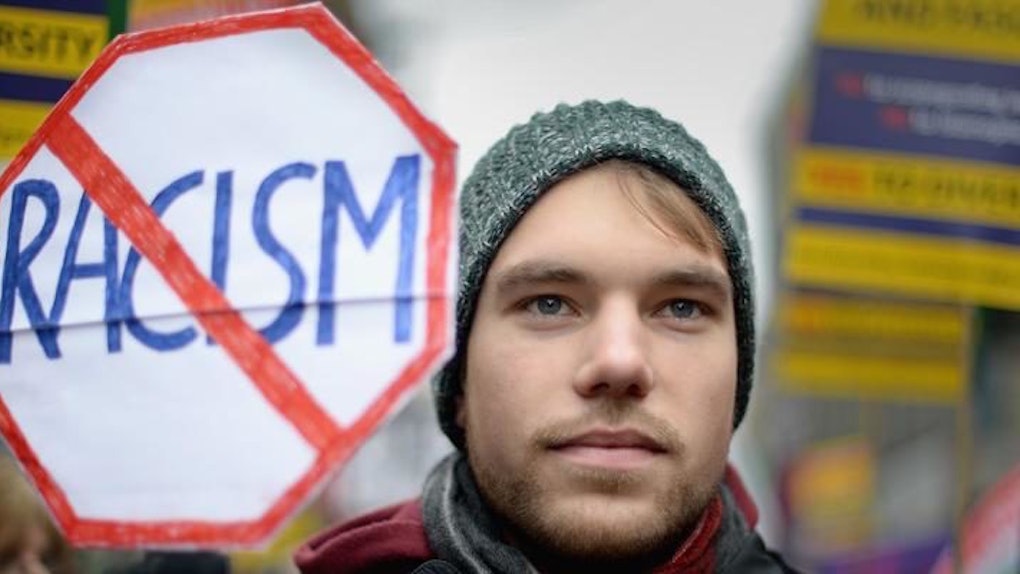 March 1 is Zero Discrimination Day, an annual event for people across the globe to come together and take a stand against bigotry, oppression and divisiveness.

It's a sad fact we live in a world where human rights and civil liberties are violated in horrendous ways on a daily basis, and no country is immune to this.

We still have a lot of work to do in terms of promoting solidarity and tolerance on a global scale.

Zero Discrimination Day stands as a reminder we must all continue the fight to establish truly just and inclusive societies.

We cannot allow discrimination to persist if we hope to progress as a species.

Here are four types of discrimination we all need to keep fighting against worldwide.

Keep in mind these are just a few examples of the many forms of discrimination people continue to face, but they are certainly a good start in terms of what we need to focus on.

Women and girls across the world continue to face gender-based discrimination every single day. This translates into various forms of violence as well as limitations on opportunities that should be afforded to all people -- especially education and employment.

According to UN Women, it's estimated around 35 percent of women globally have experienced physical or sexual intimate partner violence or sexual violence by a non-partner at some point in their lives.

Indeed, women and girls experience violence in far too many forms in many societies worldwide.

For example, around 200 million women and girls have been subjected to female genital mutilation in 30 countries. Most of these girls experienced this before they were 5 years old.

What's more, around 70 percent of all human trafficking victims are female, and this is just a sample of the statistics surrounding the physical and sexual violence women continue to face.

On top of all this, women continue to face educational limitations, as girls and boys attend secondary school in equal numbers in only four out of 10 countries globally.

In the words of Nobel Peace Prize winner Malala Yousafzai,

We cannot all succeed when half of us are held back.

It's time for all of us to come together and rid this world of gender-based discrimination. Women's rights are human rights, and everyone deserves equal opportunities.

In the US, for example, systemic racism continues to impact minorities. This is particularly evident in the US criminal justice system.

As the NAACP highlights, blacks are imprisoned at nearly six times the rate of whites. This is a large part of the reason why the US has the highest incarceration rate in the world.

There is ample evidence the high rate of incarceration among blacks in the US is a product of discrimination. For example, whites and blacks possess marijuana at the same rate, yet blacks are nearly four times as likely to be arrested for it.

Whites in America are more likely to sell drugs in general, but blacks are arrested for distribution or possession at a far higher rate.

In 2014, FBI data shows 6,727 individuals in the US were victims of hate crimes, and around half (48.3 percent) were targeted because of their race.

The US is just one country where racial discrimination is still a widespread problem. We have to work harder to promote inclusiveness and celebrate diversity.

Across the world, the LGBTQ community is continuously subjected to myriad forms of oppression. A staggering 80 countries have laws barring same-sex relations or discussions of gay rights. In some countries, homosexuality is even punishable by death.

Even in countries where homosexuality is legal, other restrictions persist. It's time for this to end.

In the US, 18.7 percent of the victims of hate crimes in 2014 were targeted because of their sexual orientation.

No person should be judged or persecuted on the basis of his or her sexual orientation.

Religious discrimination continues to be a global problem, as it has been for centuries.

In the US, for example, 17.1 percent of hate crime victims in 2014 were targeted because of their religion. Following the San Bernardino and Paris attacks last year, the rate of hate crimes against Muslims tripled in the US.

But America is hardly alone. According to a study from Pew Research, around a quarter of the world's religious groups face hostilities in their countries. Sometimes this occurs in the form of social hostilities, but many governments also place restrictions on certain religious groups.

Looking at overall limitations on religion, Pew found around 39 percent of countries have high or very high religious restrictions. This means around 5.5 billion people live in societies with these restrictions.

Religious freedom is a basic tenet that should be upheld in every modern society, and people should not be persecuted on the basis of their beliefs.

All of us can do our part in the fight against the many forms of discrimination worldwide. The first step is getting informed and spreading awareness. Celebrating Zero Discrimination Day is a great way to start.