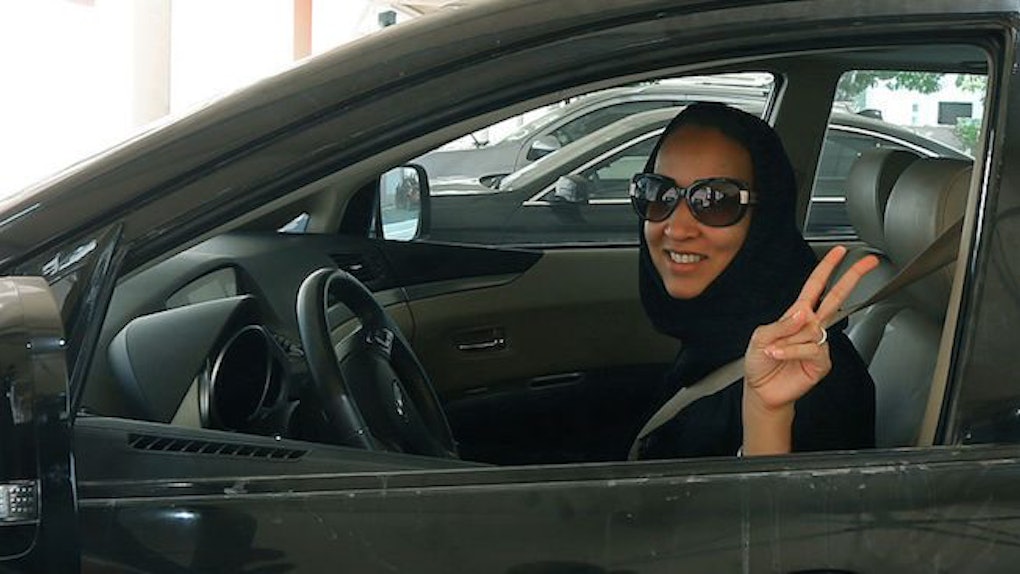 Women Can Drive In Saudi Arabia, But We're Not Cheering Yet

On Tuesday, Sept. 26, the Saudi Foreign Ministry announced that a royal decree has been issued that will allow women to drive in Saudi Arabia. On the surface, this is a monumental move for the Islamic country, which remains the last nation in the world to let women behind the wheel. Although it's hard to dispute any progress towards equality, there are some caveats to this decree that more than question its intent.

The Foreign Ministry's statement was brief, leaving many with unanswered questions about details of the law. The first loophole is that the ruling won't go into effect until June 2018. At this point, the government will begin issuing women driver's licenses, which were never officially banned by law, but were unobtainable at any cost to women. The second caveat is that women may still have to answer to their male guardians, who give them permission for many other activities, like traveling abroad or getting married. The third possible hangup is vaguely stated in the decree; the new regulations "must apply and adhere to the necessary Sharia standards," which is referring to Islamic law. Basically, these new laws have to be approved by the most conservative clerics in Saudi Arabia, the Wahhabi clerics.

While many women are rightfully overjoyed at this progress, many other scholars are skeptical of the timing and intention for such a decree. One Saudi Arabian professor believes this to be a PR stunt to gain popularity for the king, King Salman bin Abdulaziz Al Saud, both internationally and among his own people. Madawi al-Rasheed, a Saudi Arabian professor of social anthropology at LSE told BBC Radio 4's Today Program,

The Saudi king needs women at the moment. He needs the publicity given that his regional policies have utterly failed in Syria, Yemen, and Qatar.

Rasheed went on to say that this new law will be used to "justify the detentions that took place only a week ago where almost 40 people were detained simply because they were activists and human rights professionals. In order to divert attention from this incident, we will find the women driving is now going to be headlines across the globe.”

So this move is a potential PR win for the king, who needs the approval for both international business and domestic unity amongst a growing number of economic problems. Similarly, just last week, Saudi women were granted access to sports stadiums. Coincidence? Not even close. The agenda reads more "national pride and harmony" rather than "women equality" for the conservative Islamic nation.

This attitude is clearly evident in the opinions of many Saudi scholars and critics. Just last week, a Saudi cleric Sheikh Saad al-Hijri said in a lecture that women “don't deserve to drive because they only have a quarter of a brain.” His lecture revolved around the “evils of women driving.” Other critics, according to the Independent, have argued that as a result of women driving, they would be sexually assaulted, engage in promiscuity, and corrupt the wider society. One cleric claimed, citing zero evidence, that driving damages women's ovaries.

Among the opposition and ill intent, it is a win regardless for the women of Saudi Arabia. Women have been arrested for protesting for these rights for years, including women apart of the Women2Drive campaign started in 2011. Saudi Arabian women on Twitter have mixed emotions of excitement and hesitation for when and if this law is officially implemented.

The details of the decree are still up in the air, and may very well end up being similar to other failed proposals for women driving in the past. The king's intention may have been for his own international and domestic popularity, but if women are given even a taste of progressive freedom in Saudi Arabia, there's hope that change will continue to unfold for them in the future.