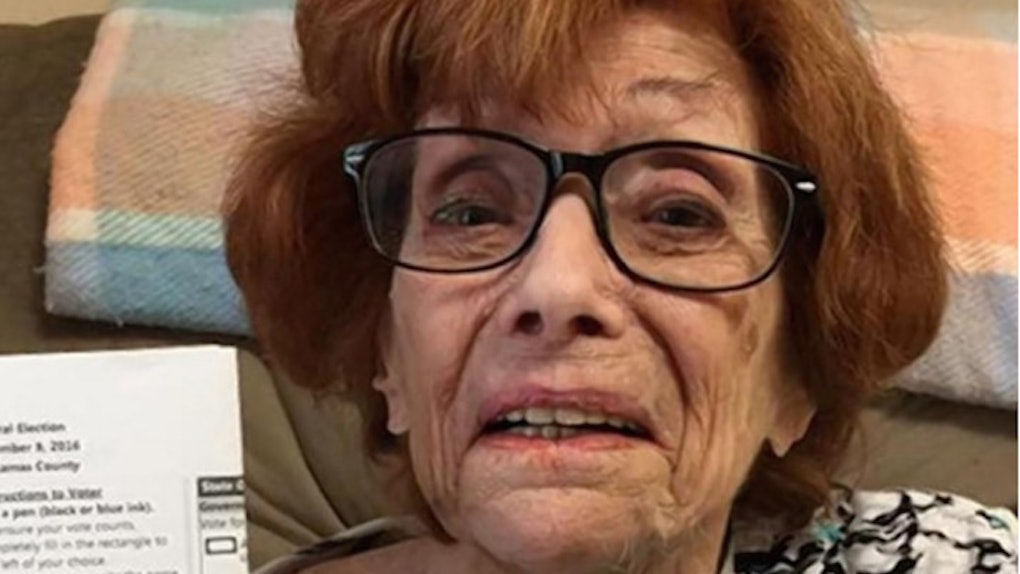 Anita Harris was 90 years old when she finally got to vote for a woman for president. She died just a few days later.

Her son, Scott Harris, shared the news in a secret Facebook group for Hillary Clinton supporters on Wednesday.

He posted a photo of his mother with a mail-in ballot. She had filled in the vote for Clinton.

My mom. Voting for HRC. She waited 90 years. She passed away last night. She'll be cheering from above Tuesday nite.

For many older women, this is an incredible election in which they get to see a peak in the gender progress they've witnessed their whole lives.

There are even some women who are voting for a female president -- but were born before they actually had the legal right to vote as a woman.

102-year-old Jerry Emmett, for instance, voted for Clinton in Arizona this week.

It's a good reminder in this year of madness that there's real, significant history happening here.

Harris's post about his mother has gone viral. People on Facebook are sending him and his family their condolences.

He told HuffPost he thinks his mother would have enjoyed this moment of fame.

Frankly I can't think of a better sendoff for mom than going viral. She always was a bit of an attention-seeker. LOL.

My brother and I are overwhelmed at all the responses to a simple picture. What is amazing is that human kindness still exists within this contentious election. It reminds me of people stopping and taking off a hat as a funeral procession passed by. Honoring a complete stranger. Just shows Love Trumps Hate.

He told the Facebook group his mother had been a "Roosevelt Dem" and "damn proud of it."

While she didn't to see the first female president, we're happy she was finally given the chance to vote for one.