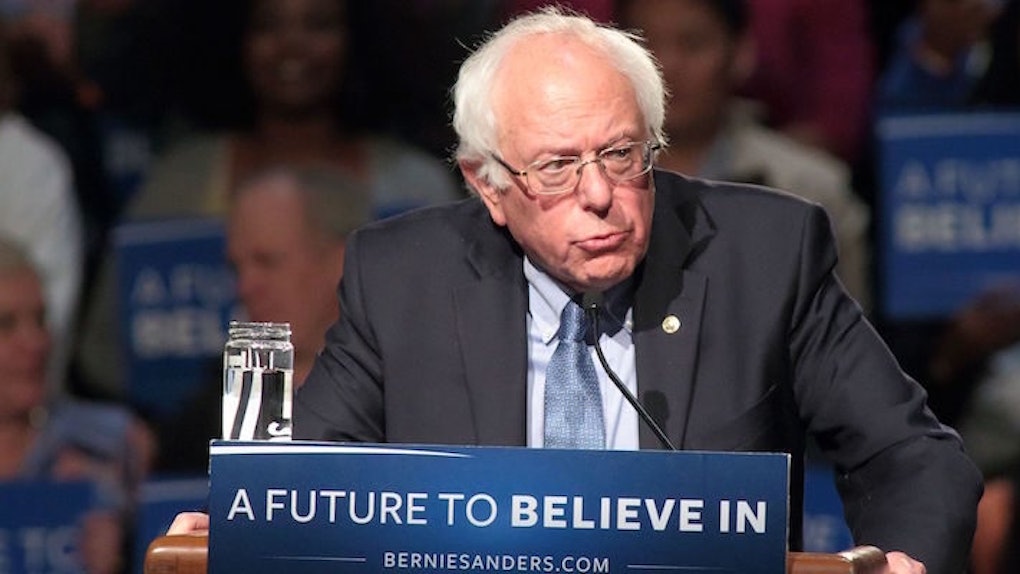 Last week, the hashtag #BernieLostMe began trending on Twitter. This was most likely in response to the Nevada Democratic party convention. For those of you who've been living under a political rock, there was a, shall we say, spirited debate over a number of Nevada delegates still up for grabs and whether they would be assigned to Bernie Sanders or Hillary Clinton before the national convention in Philadelphia this summer.

The Nevada Democratic party rules, while long established, are admittedly arcane and difficult for the layperson to parse. I won't get into the minutiae, but in a nutshell, there were 23 delegates still to be appointed at convention and party rules stipulated that delegates had to meet certain requirements (attending the convention, registering as a Democrat by May 1, having the party confirm one's address and phone number, etc.) in order to be certified and assigned to one candidate or the other.

Not all of those requirements were met by a number of Sanders delegates, and an intra-party fracas ensued. Name calling commenced. Threats were made. Insults were slung. Depending on who you ask, chairs were as well.

The fallout from the Nevada convention out has been somewhat predictable. Many Hillary supporters are outright condemning what they characterize as immature and violent behavior.

Conversely, many Bernie supporters are crying foul at what they view to be corrupt proceedings and the behavior of the Nevada Democratic party's chair, Roberta Lange, alleging that this is just another example in the months-long assault against the Sanders campaign by the DNC, Hillary Clinton and establishment elites.

If your Facebook feed looks anything like mine, the crux of these arguments are old hat, and you've been watching this play out for months. However, what is new is the start of what is seemingly a turning of the tide for some Sanders supporters. A growing number of Bernie supporters see Sanders' somewhat lukewarm rebuke of the aggressive rhetoric as the last straw in a series of anti-Clinton and anti-Democratic slights unbefitting the character of the candidate that initially attracted them.

Bernie Bros. Berniebots. Berniacs. Call them what you will, this small percentage of vocal Sanders enthusiasts have been a thorn in many a side in the Clinton camp.

Initially, they were characterized as benign internet trolls taking thinly veiled sexist swipes at Clinton. More recently, any cursory glance at political social media pages will prove that any comment that is perceived as pro-Clinton is often met with a deluge of pro-Sanders supporters accusing the commenter of being a paid Clinton troll.

However, some from this relatively harmless camp have evolved into a force that is more menacing. The passion these supporters feel for their candidate and his ideas, while admirable, has driven some to make threats against Clinton superdelegates for the mere act of supporting her. The threatening phone calls and harassing emails being sent to delegates, many of whom are volunteers and not elected officials, does not cast a positive light on the Sanders camp.

In the beginning of the campaign, it seemed Senator Sanders was much more deliberate about denouncing behavior like this, but as time has worn on, the campaign has gotten uglier on both sides, with a noticeable shift from solely issue-based disagreements to questions of character and even qualification to be president.

Sanders' critique of his supporter's behavior has gone from "We don't want that crap," to "It goes without saying that I condemn any and all forms of violence." For some Sanders supporters, it doesn't go without saying, and any reluctance to give a full-throated reproach on the part of the Sander's campaign leaves them vulnerable to losing supporters who may be turned off by a weak response.

Clearly, an overarching theme of the Sanders candidacy is that "the system" is rigged — the economy, laws and loopholes rigged in favor of banks and corporations, and a political system that disenfranchises the working poor and everyone not rich enough to purchase their own lobbyist.

This populist message goes straight to Sanders' popularity and rather unexpected success at the polls. It resonates deeply with many Americans across diverse backgrounds who feel they finally have a candidate who will fight for the progressive agenda of their dreams, and with good reason, considering the crippling debt and income inequality many Millennials are struggling with.

While no doubt Sanders supporters are great in number, it's hard to argue that the number of Clinton supporters easily outpaces them both in the popular vote and the delegates. Depending on who you ask, Clinton has received somewhere between 2.5 and 3 million more votes during the primaries and caucuses than Sanders.

Additionally, her delegate lead is so substantial, that even if Sanders were to persuade every single superdelegate who has declared for Clinton to abandon her and back him instead he would still have to win roughly 300 additional delegates to secure the nomination. Not only is that scenario unlikely, given the polling numbers in Clinton's favor out of California, it's virtually impossible.

Despite all the work and fervor and energy that Sanders and his supporters have put into this primary race, it appears the nomination will ultimately go to Clinton. Perhaps born from that disappointment is the narrative that many of Clinton's wins have been the result of voter suppression, underhanded DNC tactics and flat-out corruption.

For virtually every primary, there is a matching conspiracy theory about how Clinton used her influence to bully voters at the polls or was in cahoots with the state of Arizona to suppress voter turnout or orchestrated a mysterious purge of voters from the rolls in Brooklyn. Regardless of how much someone backs Sanders, the claims that Clinton is in any way complicit in the above have no basis in fact.

Sanders supporters who were drawn in by his honest nature, unvarnished and unspun approach to politics and his character are reasonably put off by his unwillingness to quell those rumors among his more fervent supporters. How difficult would it be to say that baseless attacks against the Clinton campaign are not representative of our better selves and the kind of political revolution we're advocating? How difficult would it be to say that yes, the system can be rigged, but not every primary loss is corruption?

Insinuating that the difficulties the campaign has run into are due to shady, unfair dealings of the DNC is not new for the Sanders campaign. In late March, rumors began circulating that the DC Democratic party had deliberately left Sanders off the DC ballot, when in reality, it was a bureaucratic perfect storm of offices closing before the official deadline and unnecessary procrastination on the part of the Sanders campaign. It was easily cleared up, and Sanders will be on the ballot, but that didn't stop the conspiracy theories from taking off and persisting on social media for weeks after.

Or take for instance the Sanders campaign's claim that millions of voters were disenfranchised in New York during the primary because they are independents. Again, for a candidate whose appeal is at least partially derived from a belief in the value of the truth, this argument is disappointing in its inaccuracy.

Of course, those voters had the option to vote, they just weren't registered in the party of the candidate they wanted to vote for. New York has closed primaries and that was nothing new. Sanders knew this when he chose to run as a Democrat and what the implications of that were.

The larger question for some Sanders supporters is why wasn't the campaign shouting from the rooftops about the deadline to register? Why weren't there billboards and television ads that made certain that his supporters — people who are on fire for him and a political revolution — knew the rules and had done their due diligence in time for the primary? These missteps aren't the result of a political machine out to suppress the will of the voters; these were easily avoidable mistakes subsequently spun into political boogeymen.

Sanders supporters who are jumping ship gave several reasons why, but most of those boiled down to this: The weaknesses of a campaign that keeps making simple, unforced errors, has failed to condemn its radical cohort and is selling its supporters a myth that a presidential nomination is still a likely possibility.

Many expressed sadness that a campaign they'd felt such hope and enthusiasm for had devolved into its current state. Some expressed anger that a campaign that began with a focus on issues had diverted to character attacks. Can a revolution, even one you wholeheartedly support, survive if it's not organized? And just how effective will it be with one camp devolving into harassment and conspiracy theories while the remainder are left to stand by and wonder where the revolution went wrong.