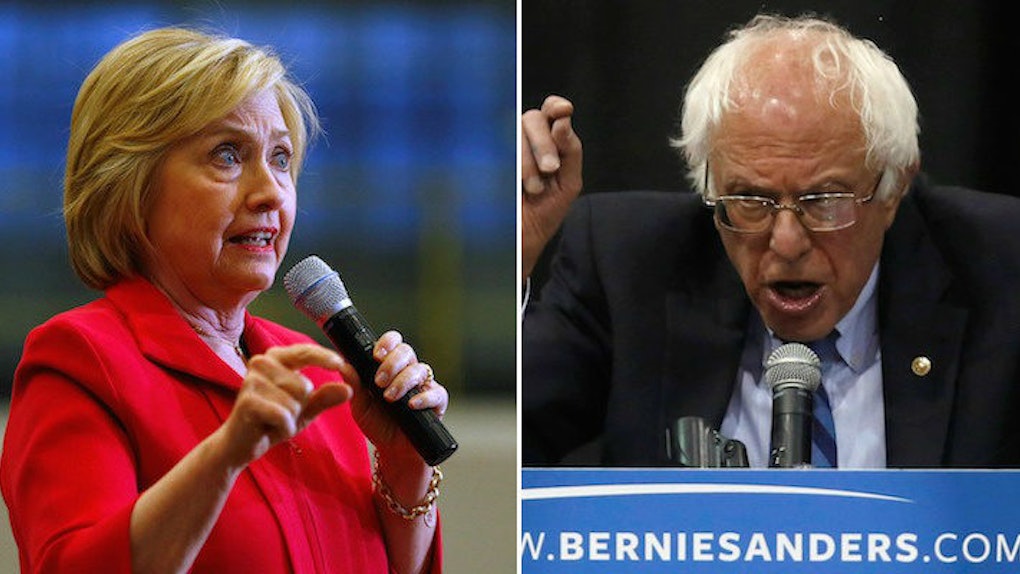 On Wednesday evening, #BernieLostMe began to trend on Twitter. Not long after, #HillaryLostMe also appeared.

Neither hashtag really make sense, because it seemed as though most of those tweeting #BernieLostMe were Hillary supporters. In other words, Sanders never had them in the first place.

The same goes for those who tweeted #HillaryLostMe -- most were Sanders supporters.

Here are a few examples:

There were also a lot of Bernie supporters trying to flip the script on the trend and tweeting things like this:

Additionally, there were those who took the opportunity to make jokes out of all of this (some were pretty funny).

Regardless of how people used them, the two trending hashtags are emblematic of something much larger going on in the Democratic party right now: It's incredibly divided.

Sanders and Clinton supporters seemingly despise one another right now. The vitriol being exhibited between the two camps is comparable to the never-ending animosity between liberals and conservatives.

While everyone expected Trump to split the Republican party in half, the GOP establishment actually seems to be warming up to him.

Meanwhile, it now seems as though the Democratic party risks being torn completely apart, which was particularly apparent this past weekend via the chaos at the Nevada Democratic Convention.

What this really comes down to is two very different visions for the future of the Democratic party.

Sanders and his supporters seek to shake things up and push the party far to the left, while Clinton and her camp are more comfortable taking small steps based off of what the Obama administration accomplished.

Those on Sanders' side see the Democratic party as inherently corrupt. They are deeply disenchanted with the Democratic establishment. In their view, this election was rigged in Clinton's favor from the start. For all of these reasons and more, these individuals want to turn the system inside out, completely revamping the party as we know it.

Many Sanders supporters see Clinton as a progressive in disguise, and just as conservative, if not more so, than many Republicans (especially when it comes to foreign policy). This helps explain the "Bernie or Bust" sentiments among many of Sanders supporters.

Correspondingly, Clinton supporters see the Democratic party as the only hope against the insane perspectives and policies of Republicans. They'll do anything to prevent Trump from getting to the White House.

In their view, the grievances of Sanders supporters are just the infantile complaints of conspiracy theorists and sore losers. Moreover, they see Sanders as someone who never really stood in unity with the Democratic party in the first place.

But when it comes down to it, both sides probably agree on far more than they realize, at least from a policy standpoint. Take, for example, the fact Clinton and Sanders voted the same way 93 percent of the time during the two years they served together as senators.

What Clinton and Sanders disagree on more often than not are small details regarding big issues they largely see eye-to-eye on.

Both candidates have strengths and flaws, but it's also fair to say they both have far more progressive visions for the US than Donald Trump, the presumptive GOP nominee.

Sanders supporters who just read the above statement probably thought to themselves: "Hillary isn't progressive, she's lying and corrupt."

Clinton supporters who just read the above statement probably thought to themselves: "Sanders might be progressive, but he's radical and unrealistic."

This is where we are in the election right now, both sides are very reactionary. Ultimately, this could lead to irrevocable changes in the Democratic party. It could also mean the Democratic campaign becomes such a mess that it provides Trump with a much easier path to the presidency.

Perhaps what this country really needs is a balance between the two approaches and perspectives, and, if nothing else, a civil conversation about it all before we move forward.