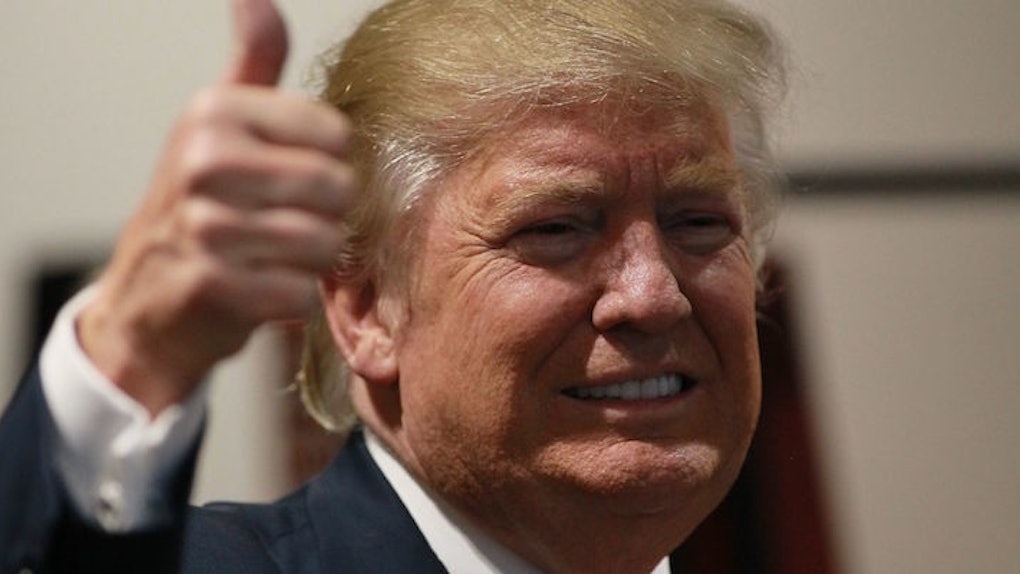 Donald Trump Lied To His Press Team About Dinner

Did we really think Donald Trump was going to follow the rules after becoming president-elect?

Trump's already off and doing his own thing. Last night, he lied to his press entourage and took his family out for a steak dinner at 21 Club, a restaurant in Manhattan, DailyMail.com reports.

He even got a standing ovation upon his unplanned arrival and reportedly told guests, "We'll get your taxes down, don't worry about it."

Trust me, I get it -- everyone deserves a nice family outing once in a while.

But when you lie to your hired press entourage one week after getting elected president of the United States and take a motorcade to a fancy dinner up the street, it becomes a little worrisome.

That's exactly what he did, though.

On Tuesday night, Trump's press liaison, Hope Hicks, was told the president-elect was going to spend the night in the Trump Tower after an alleged apartment party.

Hicks then told Trump's press pool they might as well go home, since he would not be leaving his residence on Fifth Avenue.

However, one hour and 15 minutes later, the Trump family sneakily left the apartment block and made their way to the prestigious steakhouse, where Trump is apparently a regular.

As you can imagine, Trump's press pool with pissed. Upon discovering a tweet from a Bloomberg reporter who was coincidentally in the restaurant, they flocked to the scene.

To ease the tension between Trump's press team and the president-elect, Hope Hicks assured Trump's employees this was not a sign of disorganization to come.

Apparently, she claimed the confusion arose because Trump still lacks a "protective press pool" that's supposed to follow him everywhere.

She assured them once Trump's protective press pool is solidified, press will have more access to him.

Even so, the fact Trump was so easily able to lie to his own team member and then enjoy a steak dinner without remorse is a bit terrifying.

Is this a taste of what's to come? I guess we'll find out.

Oh, and in case you wondering, he ordered a virgin Bloody Mary.