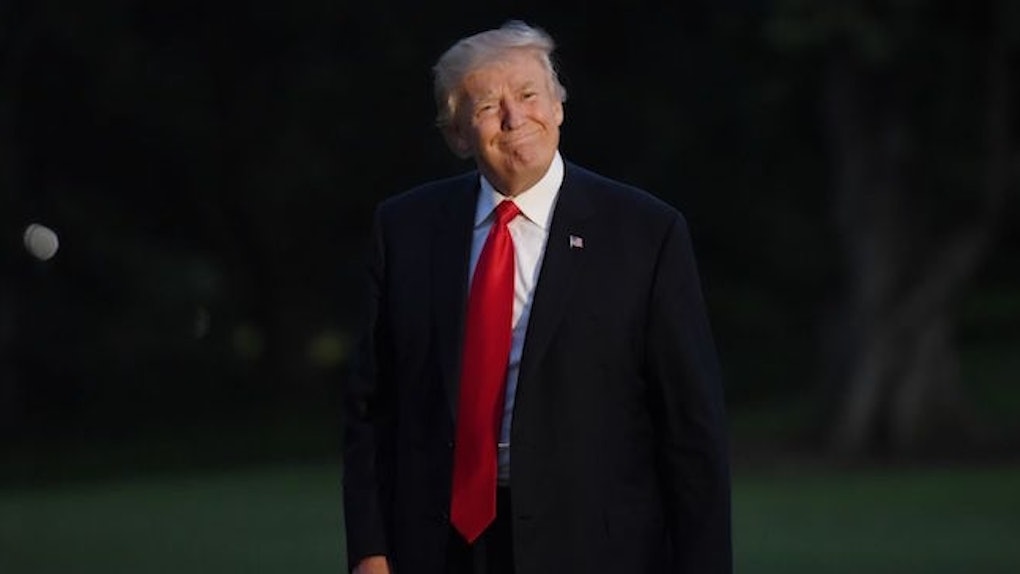 Trump Tweets About Not Having Time For TV, But His Other Tweets Show That's Fake News

On Wednesday, July 12, President Donald Trump tweeted he has "very little time for watching TV," just a few hours after he tweeted a Fox & Friends clip.

He also spends in an inordinate amount of time complaining (i.e. tweeting) about how the media covers him, especially CNN.

Not to mention, the man is a former reality TV star with a well-documented obsession with TV ratings.

So, it's a bit hard not to roll your eyes at Trump's claim.

After Trump's tweet, Phillip Rucker of The Washington Post tweeted, "White House officials tells us President Trump has been watching plenty of TV news this week, when he's had nothing on his public schedule."

Trump watches roughly five hours of TV a day (he's not a big reader, either), and there's a strong case to be made he tunes in more than any president in U.S. history, according to The Atlantic.

Most Americans over the age of 65 (Trump is 71) watch around four hours of TV a day, according to the Bureau of Labor Statistics, but most Americans are not the president.

An analysis from Axios shows Trump starts his day with Morning Joe (which he tweets about, A LOT) and Fox & Friends, and he watches Meet the Press on Sundays, among other programs.

We also know, based on his tweets, that Trump has spent a significant amount of time tuning into Saturday Night Live.

There's arguably no other president who's been so obsessed with media coverage, or how they're depicted in the news.

Trump's constant tweets about the media (FAKE NEWS) are all the evidence we need to support this assertion.

The president might claim he doesn't watch a lot of TV, but we have the receipts.

Trump describes any programs or networks that are critical of him as FAKE NEWS, but tells people to watch programs and networks that cover him in a positive light.

The president also seems to gather a great deal of his information from the news.

There's been a number of times where Fox News has reported something, and Trump immediately tweeted out the same information or made public statements that essentially regurgitated what Fox said.

Trump even admitted as much at one point after making a bizarre comment about a terror attack in Sweden that didn't happen.

The President of the U.S. has access to the most advanced intelligence apparatus on the planet, but Trump seemingly prefers to watch Fox News for his info.

Some have gone as far to label trump a TV addict.

Emily Yoffe did an analysis of Trump's TV habits for Politico and described television as Trump's "drug of choice."

Yoffe consulted experts in psychology and found there's a very real possibility Trump is addicted to TV, and this could be having a very negative impact on him from a cognitive standpoint.

One of the studies Yoffe cited, a 2013 paper titled “Hidden Addiction: Television" from Steve Sussman, a professor of psychology at the University of Southern California, and Meghan Moran, of the Johns Hopkins Bloomberg School of Public Health, found "one's ability to continue to function in roles at work or at home could become jeopardized as the result of one's television addiction."

This is disconcerting to think about when it comes to the President of the United States, who's ability to perform his or her job impacts the entire world.

It's problematic to have a president who watches so much TV.

Russell Riley, a presidential scholar at University of Virginia Miller Center, told The Atlantic it's a "real problem" to have a president who's so obsessed with TV.

The most valuable commodity in Washington is the president's time, bar nothing. A president who elects to invest a lot of his time in tracking his own media coverage is, to some extent, debasing his own currency.

He has a point.

We already know the president spends a huge chunk of time either tweeting or golfing (so far, roughly 22 percent of his presidency has been spent on a golf course), and if you add the hours he sets aside for TV, it makes you wonder when he has time to lead.