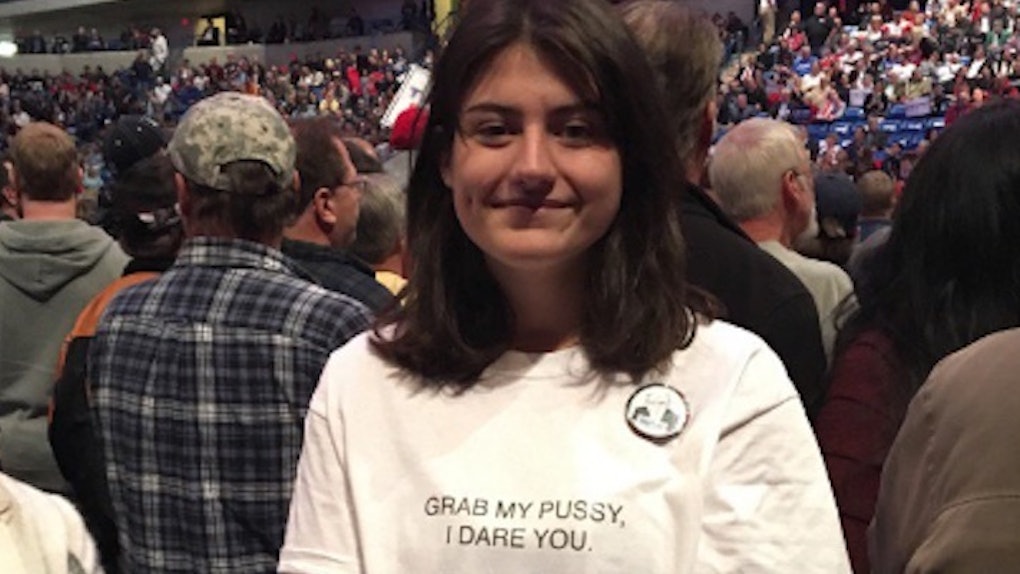 Trump Protester Wears 'Grab My Pussy, I Dare You' Shirt

An 18-year-old named Anna Lehane is clearly tired of Donald Trump's misogynistic nonsense and wore a homemade shirt that said, "Grab my pussy, I dare you," to a rally for the Republican presidential nominee in Pennsylvania on Monday.

The shirt is clearly in reference to a video that recently surfaced in which Trump bragged about sexual assault and told Billy Bush being "a star" means he can walk up to women and "grab them by the pussy."

Lehane, who is a high school senior, is not OK with this demeaning and predatory rhetoric.

Speaking with The Huffington Post, Lehane described what inspired her to wear the shirt,

I made the shirt as a protest to people in the public spotlight on such a global platform making such disrespectful, degrading and misogynistic comments and still being taken seriously.

While she wore the shirt to make an important and valid point, not everyone received it positively.

Many people took pictures of my shirt without permission and there were some degrading comments made ― mostly by older white men it seemed.

Lehane seems to be unfazed by the backlash, however, and said she ultimately plans to sell the shirts.

This young woman's anti-Trump position is fairly emblematic of the Republican presidential nominee's overwhelming lack of support among younger voters.

Correspondingly, Lehane's shirt was also adorned with a pin of Senator Bernie Sanders, who saw massive level of support from young voters during the primary season.

Democratic presidential nominee Hillary Clinton is also struggling to win over young voters, but Anna Lehane is not one of them.

In spite of wearing a Bernie Sanders pin, Lehane told Elle she plans on voting for Clinton. She said,

Hillary Clinton wasn't my first choice, but she stands for women and I stand for women. And Bernie Sanders supports Hillary now -- I'm not just basing my opinions on him, but I think Hillary is definitely the better choice for the president of the United States.

With that said, Lehane said she doesn't want people to talk about her, but rather the broader message behind the shirt,

I hope people will take away that the opinion of every person matters. It doesn't matter your race, gender, or age, whatever. You need to value yourself and what you're trying to say and you can't let anybody, no matter how powerful they may seem, quiet you.

Wow. This teen is as eloquent as she is brave.

With young people like her around, it's a lot easier to feel confident about the future of the country.

Citations: This Teen Wore A 'Grab My P***y, I Dare You' Shirt To A Trump Rally (Huffington Post)