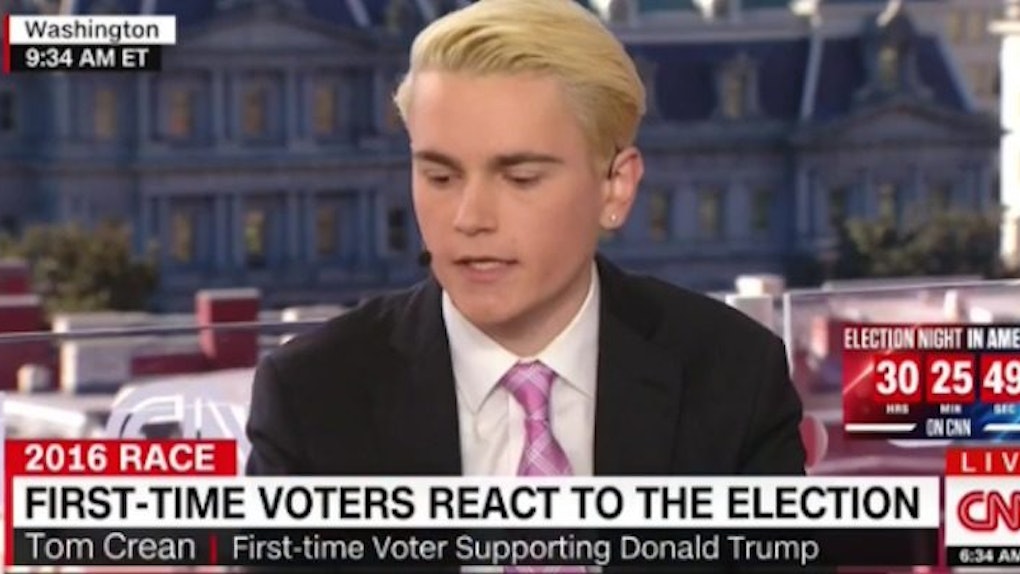 Tom Crean, a first-time voter in this presidential election, got a chance to be on CNN on Monday morning to explain his support for Republican nominee Donald Trump.

Crean is a member of the George Washington College Republicans and a proud Trump supporter.

He also happens to look a lot like Draco Malfoy from "Harry Potter."

Now I'm sure young Crean wasn't actually raised by Death Eaters and has never donned a real Sorting Hat, but he does look an awful lot like the infamous "Harry Potter" character.

Check out the classic Malfoy hair cut, color and styling.

Crean was probably expecting some backlash from the public for his appearance on Monday. But I'm not sure he expected it all to be centered around his celebrity resemblance.

We all know you really shouldn't judge people by their looks. That's super rude, and also a lazy analysis. But, I mean... how can you not see it?

Of course Twitter went wild as soon as they saw Crean's hair. It also didn't help that he shares a name with Indiana Hoosiers basketball coach, Tom Crean.

Guys. For real. Think about what your hair connotes before you gel.

For what it's worth, Crean did say some things. Since we're all about not judging people by how they look, let's read what he had to say.

According to Mediaite, Crean said on CNN,

I personally voted for Trump as my first ever vote. And I think he does get a bad rap because he is a movement of the people. Like, the establishment has been against him from the beginning, and I think that's kind of a uniquely American campaign in a way. Because we, as a country, against the odds beat Great Britain.

Crean believes Trump is a "compassionate and intelligent man" whose remarks about women and minorities are taken out of context to make him look bad.