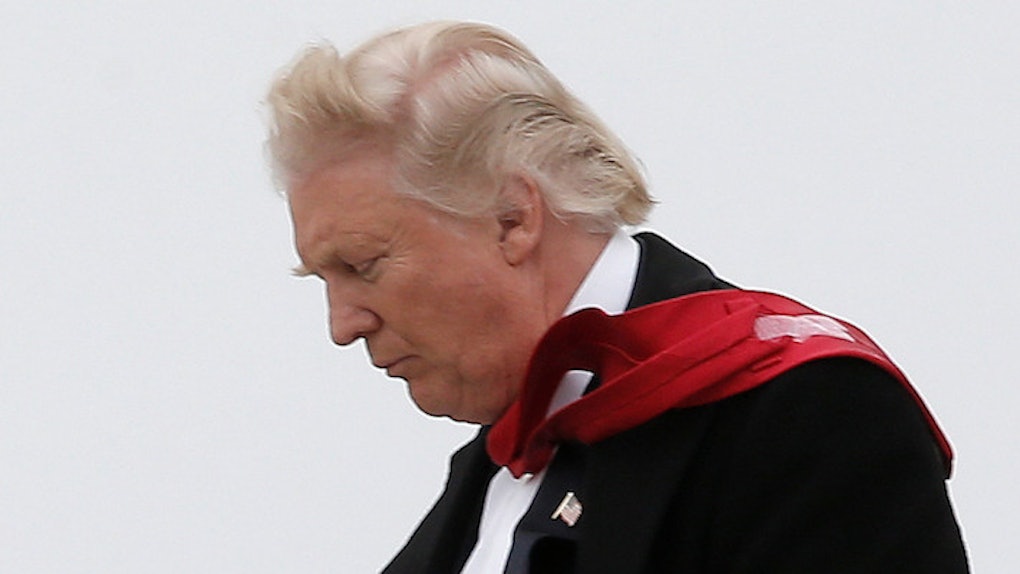 Trump Was Caught Using Scotch Tape To Fix His Tie

Who knew Donald Trump was a master of implementing nifty fashion hacks?

Not many of us, but now we know!

The president-elect is coming off of a hot open to his "thank you" tour kickoff rally in Cinncinatti, Ohio last night.

While there is plenty to talk about, including Trump's announcement that retired marine General James Mattis will potentially serve as secretary of defense, Twitter seems to be stuck on one thing: scotch tape.

That's right, screw everything else... We need to talk about Donald Trump using actual scotch tape to hold his signature red tie in place. Enter #TieGate.

The political duo stopped by the air-conditioning and heating company Carrier to announce a new deal to secure 1,000 jobs in the United States and prevent them from going to Mexico.

While Trump was exiting the aircraft to make his visit, a press photographer snapped a perfectly-timed photo of his red tie flapping around.

Political reporter Hunter Schwarz posted the photo on Twitter with the caption reading,

Look close and you'll see Donald Trump scotch tapes his tie together. As seen as he excited plane in Indiana today as the wind kicked up.

Don't believe him? You'll just have to see it for yourself.

Here's the hilarious photo of Donald Trump's signature red tie being held together with scotch tape.

Uh oh, this could be "the last straw" for Trump!

The jokes were ENDLESS!

Some speculated that China had something to do with this.

I don't know about you, but I think this calls for a new hat!

Now that's something to talk about!

Citations: People on Twitter Are Going in on Trump for Using Scotch Tape to Hold His Tie Together (Complex)