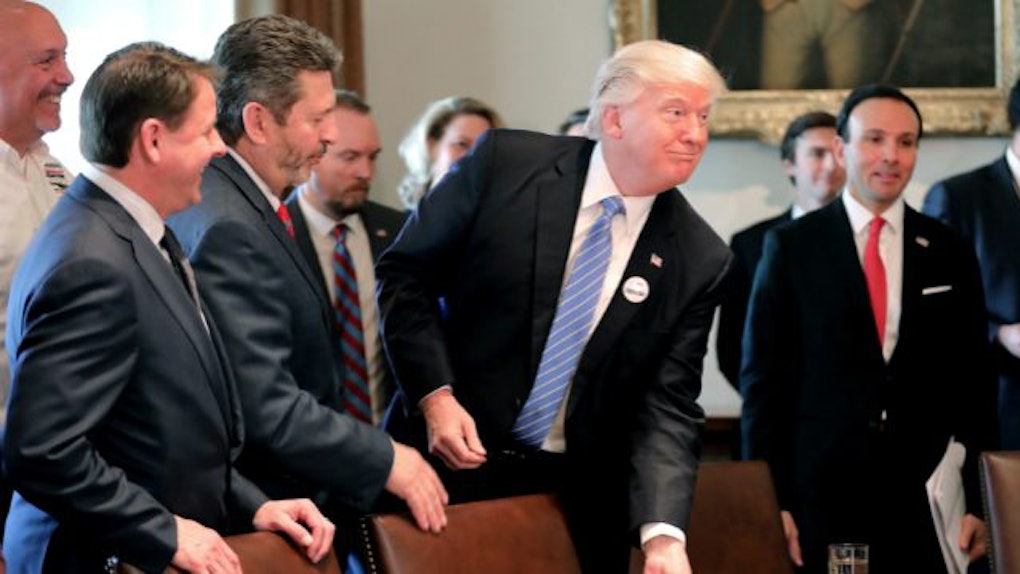 On Thursday, March 23, President Donald Trump met with a group of conservatives known as the House Freedom Caucus.

His hope was to strike a deal with the members, who are all senators, to vote for the American Health Care Act and to repeal Obamacare.

However, Freedom Caucus Chairman Mark Meadows (R-North Carolina) said there would be no deal.

Before you start thinking the Freedom Caucus is out looking for the little guy and making sure we all have good, affordable healthcare, that's not quite the case.

Yes, they do want lower premiums -- but that means bare bones healthcare. They want to watch Obamacare burn.

So, if you're wonder just who is making these decisions that affect mostly women, people of color and low income people, here they are...

Who needs maternity care and mammograms?!

YOU SHOULD HAVE THOUGHT ABOUT TAKING CARE OF YOUR BREASTS BEFORE YOU GREW 'EM.

Surely, there must be one female in the room? A women's health expert amongst them?

But, hey, lets ask the men what they think about including maternity care...

I don't need maternity care, and so requiring that to be in my insurance policy is something that I don't need and will make the policy more expensive.

I think your mom probably did.

This is, by far, the sickest "your mom" clap back ever.

Rep. John Shimkus (R-Ill.) said it wasn't fair to make men "purchase prenatal care," which made me roll my eyes so hard they done popped out of my small, little woman skull.

Basically, what these male politicians are saying is "basic healthcare" is men's health care.

By the way, mammograms are also used on men to test for breast cancer so BOY BYE.