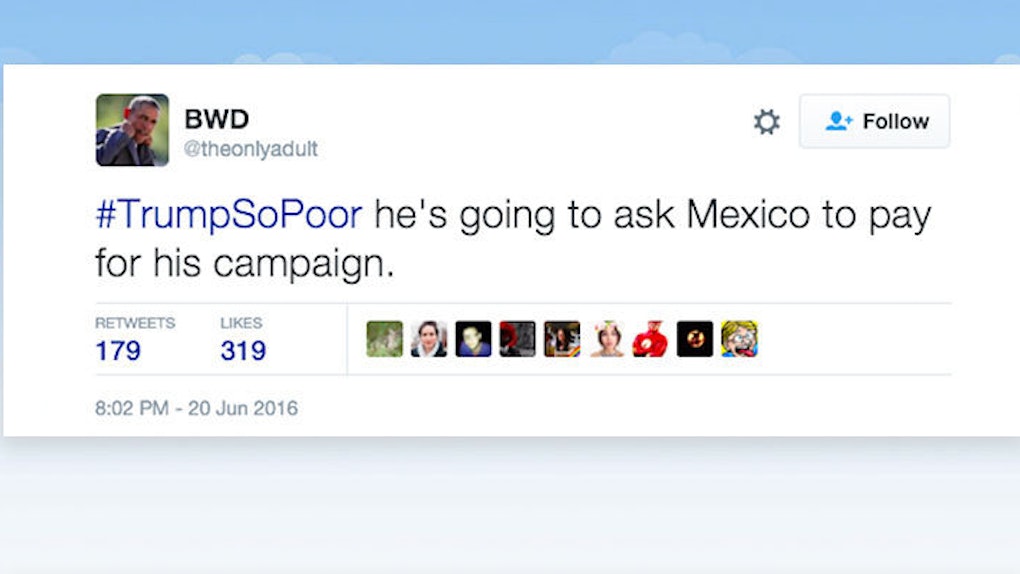 Trump's Campaign Is Basically Broke, So Twitter Trolled Him With #TrumpSoPoor

It's been a rough couple of days for Donald Trump, the presumptive Republican nominee for president.

On Saturday, someone tried to kill him. On Monday, he fired his campaign manager, and then one of his top advisors resigned.

To top it all off, a campaign finance report filed on Monday revealed the real estate mogul entered June with just $1.3 million cash on hand in his campaign account. Comparatively, his Democratic rival, Hillary Clinton, entered the month with $42 million in the bank.

Trump raised just $3.1 million in May, while Clinton raised over $26 million.

It also seems as though Trump isn't necessarily allocating his money in an intelligent way.

What does this all mean?

For one, it means the Republican party will have concerns over Trump's ability to run a serious and stable campaign for the general election.

This also means Trump will have a lot of trouble competing with Clinton when it comes to advertising and on-the-ground campaign efforts. He has a staff of around 70 people, while Clinton has a staff of nearly 700.

But it's also true that Trump essentially gets free advertising every time he says something controversial (which is almost every time he opens his mouth), so who knows how much this will really impact him in the future.

Trump might have to dig into his own pockets for his general election campaign, as assistance from the Republican National Committee might not be cut it.

But, given Trump loves to brag about how rich he is, a lot of people were pretty overjoyed to hear about his campaign's money problems. As a result, #TrumpSoPoor became a trend on Twitter on Monday night.

As always, people found a way to relate this to Trump's hair

There was also some concern for Bernie Sanders.

Trump should recognize he definitely has other career options.

The Trump train is breaking down.

He already said Mexico will pay for his wall, why not his presidential campaign?

That's a waste of Tang.

Hard to sympathize with Trump when he was born into affluence.

This is just mean (but I still laughed).

Trump might have to use cheaper materials to build his wall now.

There's only one word to describe all of this: sad!

The internet can be so cruel, but given Trump is Twitter's number one bully, this was pretty enjoyable.